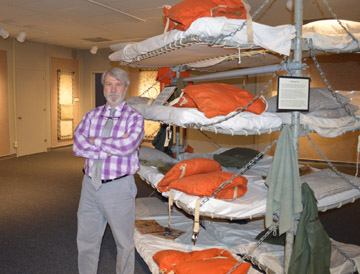 David Beard, director of the Museum of the Gulf Coast stands in front of bunks that are part of the "Marking Time:Voyage to Vietnam" traveling exhibit.

Their romance may or may not have lasted, but on a ship headed for Vietnam back in 1967, the words “Dave and Pam, True Love,” held promise for a young man headed off to war.
Scribbled on the underside of his bunk mate’s mattress by the unknown author, the words, and many others like them, are among a unique exhibit on display at the Museum of the Gulf Coast this summer.
“Marking Time: Voyage to Vietnam” presents the stories written in graffiti of young men in 1967 — those drafted, or enlisted, who made the long three week voyage across the ocean to Vietnam.
Their average age was 19 — barely old enough to have left the comforts of home, let alone set sail on the troopship “General Nelson M. Walker” on a voyage that would take them across the globe to the jungles of Vietnam.
There, with as much time on their hands as fear of the unknown, the young men scribed the fabrics of their lives onto the unorthodox bunk canvas diary.
Today, those writings on display at far-flung places across the nation, including Port Arthur.
“They had a lot of time to think. The soldiers and the marines did not have a lot of duties on the ship so they had a lot of free time,” David Beard, Museum of the Gulf Coast director, said.
In 2004, founders of the Vietnam Graffiti Project Art and Lee Beltrone discovered the graffiti on board the, “General Nelson M. Walker,” while the troopship was mothballed in the Virginia’s James River Reserve Fleet.
Efforts to preserve the history and artifacts found on the ship led to the development of the Vietnam Graffiti Project’s “Marking Time: Voyage to Vietnam” traveling exhibit.
In 2005, after the ship was towed to Brownsville, Texas, Vietnam Graffiti Project founders gained permission to remove and recover the historic artifacts which included more than  300 graffiti-covered canvases; three eight-man bunk units; ship cleaning artifacts, ship safety artifacts, sinage and hundred of personal items left on the ship by the soldiers and marines going to or coming home from Vietnam.
In the Museum of the Gulf Coast, the exhibit features graffiti written by soldiers or marines from Dallas, Houston and Corpus Christi.
“This was discovered in 1967 after the last trip, and the ship was immediately mothballed, so it was like a time capsule,” Beard said.
Much of the graffiti is dedicated to personal information about each soldier or marine.
One, called The Doodler in the exhibit penned his name: Glen Opheim, while another scribbled “RRB Loves Peggy.”
Others offered advice sage advice such as, “Shower Daily, remember you are making a lasting impression on our bunk buddy,” or the warning, “Seasickness isn’t funny.”
“They had three weeks to think about all phases of what they were going to do while the resignation set in,” Beard said.
Others put their artistic abilities to work and fashioned their version of the iconic Vietnam Susie, or a likeness of the cartoon character Charlie Brown morphing into a soldier.
Five canvasses with Texas graffiti, along with ship artifacts, will be on display at the Museum of the Gulf Coast until Aug. 30.
E-mail: sherry.koonce
Twitter: skooncePANews