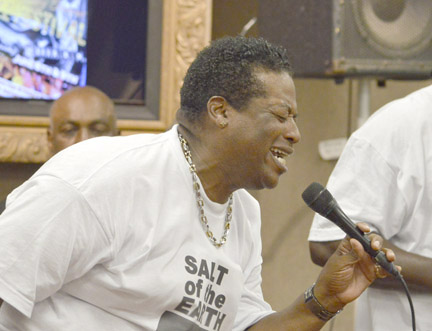 Dozens of people flocked to the Port Arthur Public Library to celebrate the life and music of the late Zachary Breaux and the city’s African American musicians on Saturday.
Music lovers raised their hands in praise and tapped their feet to the beat as Glenn Lee of the gospel group Salt of the Earth belted out “Can You Feel the Rain” during the 3rd Annual Zachary Breaux Tribute and African American Music Appreciation Month Celebration hosted by the Port Arthur History Department of the Port Arthur Public Library.
Lynn Bernard Zeno and Ellen Dee Conner, classmates of Breaux from the Lincoln High School class of 1978, sat near the back of the room enjoying the music.
“This is tremendous, it’s like family,” Conner said adding the event celebrates Breaux’s culture and heritage as well as fellow musicians from the city.
Breaux, a Port Arthur native and successful jazz musician, died at the age of 36 while trying to save a woman from drowning in Florida in 1997.
Wanda Thompson, a clerk at PAPL, swayed to the music.
“I think this event came out very good and we are learning about more and more musicians from the area,” Thompson said.
Vicky Conner makes it a point to attend the annual events held in Breaux’s honor.
“It gets bigger every year,” Conner said.
Retired opera singer Richard Perkins was one of a number of musicians honored during the event. Perkins, 69, is a Port Arthur native who has traveled the world performing.
Others musicians honored include: A Touch of Class, Zachary Breaux, Josiah Alexander, Brisco Lake, Carl Wayne and the Magnificent Seven, Alex “Gumbo” Carrier, C.J. Chenier, Ted Dunbar, Dynamic Adam, Shelton Forrest, George Hill, Ike Porter and the Fabulations, Pat Juneau, Glenn Lee, Lionel Prevost, Dwight Wagner and Sam Young and the Soul Lovers.
E-mail: mary.meaux@panews.com
Twitter: MaryMeauxPANews