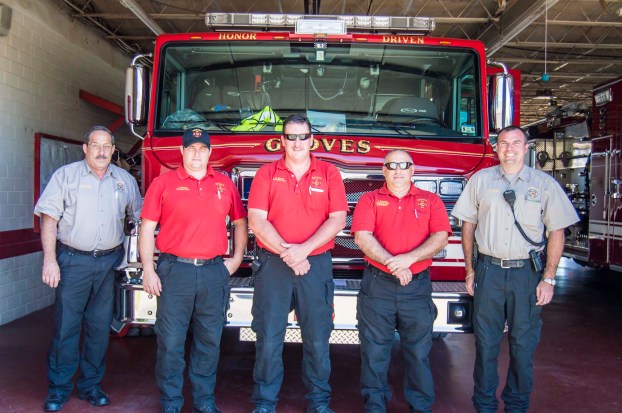 For the firefighters who rode out the September 24, 2005 hurricane within Southeast Texas, Rita is the worst relationship any of them have ever had.

As Captain Pete Konidis joked Wednesday, an anniversary with Rita should pass without celebration or flowers.

While the firefighters can look back at certain moments of the “relationship” with humor, Fire Chief Dale Jackson said there’s isn’t one among them that doesn’t still fear and respect the level of destruction Hurricane Rita inflicted a decade ago.

“It was total devastation,” Konidis said at the Groves Fire Station Wednesday afternoon. “When you come back and your community looks like an entirely different city — there’s no words to describe it.”

Assistant Fire Chief Kelley Moore said all 14 members of the Groves Fire Department evacuated to Lumberton High School as the storm hit and returned to the city as soon as the eye of the storm passed over Southeast Texas.

“I’d laid my pillow against the wall, and the wind was so bad the wall was shaking and kept bumping my head,” Moore said, laughing, Wednesday. “I thought the guys were messing with me at first, because I had just started to fall asleep. Then they started yelling at me to get up and move out, because the roof was coming off. We all moved into a concrete hallway and just tried to sleep a couple of hours before we got up, checked the radar and headed back to Groves.”

Konidis said the firefighters stayed connected to the city through Carol Sigona, owner of K-9 Dog Obedience on Lincoln Avenue.

“Carol didn’t evacuate, and at one point she called and said, ‘Come on back. It’s clear and sunny outside.’ Meanwhile, we’re all looking at the radar, and it is nowhere near done,” Konidis said. “She was in the eye of the storm. It’s kind of eerie hearing that on the phone knowing it’s only halfway over.”

Moore said when the firefighters returned, “there was nothing to come back to.” He said the Fire Department set to work clearing the roads and checking on the citizens who didn’t evacuate.

“We were back the next day — wind still howling and everything — and the city was an absolute mess,” he said. “We had to get heavy equipment in here to clear Lincoln Avenue just so we could get back to the station.

“We stayed busy clearing trees and, of course, dealing with the people. We barely had enough supplies for ourselves, so we worked to send them to the 2-1-1 sites in Austin, San Antonio — anywhere we could find for them to stay while we helped get the city back up.”

Jackson said the majority of people evacuated the city before the storm, but there were enough “holdouts” to be concerned.

“If we have people staying here, the first thing we have to do when we get back is search and rescue. As we went through the city cutting trees and setting up sites to hand out MREs (Meals, Ready-to-Eat), we had people coming to us wanting out,” Jackson said. “Between the heat, no power, no water, no gas or sewer, and the smell of rancid meat and sewage — they had had enough.”

Moore said without hospitals, grocery stores or basic utilities, the Fire Department was ill equipped to take care of the people who stayed behind.

“They don’t understand the stress they put on personnel who have to come back and work,” Konidis said. “If we can come back and focus on our work, we’ll be able to get the entire city back online faster. But when we’re trying to take care of the people who didn’t listen and stayed behind, we’re slowed down.”

“The best we could do was try to make sure everyone had enough food,” Moore added. “Beyond that, our focus had to be solving power issues. We started getting power back about a week and a half after the storm, and we immediately started getting electrical fires — you could tell which grids were back up based on the smoke.

“That was a huge concern because the water plant was still coming back online. We were limited to what we had in the fire hydrants. Luckily, those didn’t fail, but we did have a 5,000-gallon tanker — I think from Oklahoma — that came on calls with us.”

Moore said the trees that fell across the power lines throughout the city actually pulled wires inside people’s homes — a dangerous chain of events that created “direct shorts inside houses with no one inside to know a fire had started.”

“By the time we’d see smoke across town or maybe get a call from someone on a cell phone, they’d be burning pretty good,” he added.

Moore said he was in the U.S. Coast Guard Reserve when Rita landed. Ironically, he said, the Rita evacuation happened during his second shift back at the Groves station when he returned from a two-week stint in Louisiana after Hurricane Katrina pummeled New Orleans.

“It was a weird experience as a Reserve who had just been in New Orleans dealing with Katrina to come back home, get hit with Rita and the Coast Guard having to come here,” Moore said. “But the Coast Guard was such a help to us battling these electrical fires.

“When the power started coming back on, we were going house to house making sure breakers were off — because the people weren’t home to do it themselves. The Coast Guard helped us go home to home to help us prevent as many electrical fires as we could. We have close to 7,000 structures in Groves. That was a daunting task.”

Jackson said Hurricane Rita was the first storm of that magnitude to hit the region in the 25 years he’s served as emergency management coordinator.

“As soon as we announced the evacuation, we started getting calls out the wazoo. It was like you turned a light switch on and it was just panic,” Jackson said. “But you’ve got to understand — these people had been watching their TVs seeing nothing but devastation from Hurricane Katrina for weeks. It made people stand up and take notice when we put out the evacuation announcement.

“And we don’t want people to panic in the future, but we do need them to heed our warnings. An evacuation order is made with a lot of thought. That comes from the mayors and the county judge, and they don’t take it lightly. If you get an order to leave — even if it’s still a bright, sunny day — take your emergency supplies and hit the road, because something’s coming.”

For information on hurricane preparedness, contact the Jefferson County Emergency Management Office in Port Arthur at (409) 983-8333.