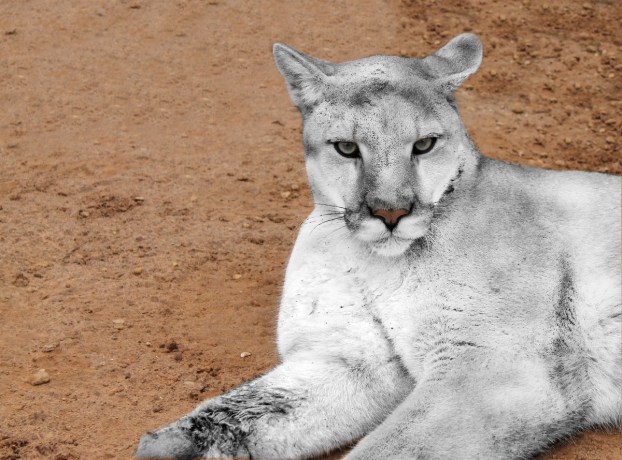 This is a photo rendering of a white cougar from a shot the author took of a regular brown-colored specimen. This is what such a cat might appear like. An albino would likely have pink eyes but the white tigers seen in zoos are not albinos. They are just white and have blue eyes. (Illustration by Chester Moore Jr./Special to The News)

Last year, an interesting story broke via KLTV out of Tyler. Landowner Mitchell Cox of Hughes Springs captured on video what he and many others thinks is a “white panther”.

“When I first saw the white animal, the first thing I thought was, it was a dog. I feel blessed to actually be able to see it,” said landowner Mitchell said Cox in the KLTV story.

“The cat jumps across about a 6 foot creek there. At first, my initial thought was it was an edited video, but upon talking to people I believe it’s true. A white albino mountain lion,” investigator Hershel Stroman, of the Morris County Sheriff’s Office told KLTV officials.

The video is interesting and the animal moves like a cougar but without a closer video (this one was shot 50 yards away) it is difficult to tell. This video has had tremendous interest on social media and inspired me to do some investigating.

What I found was quite interesting.

In 2011 a white cougar was born at the Attica Zoological Park in Greece and was aptly named “Casper”.  A high resolution video or photo of a white cougar would be a major discovery and unprecedented in Texas.

A few years before that there were many sightings of a white cougar in the Red rock Canyon National Conservation Area near Las Vegas.

White cougars are super rare but there is a precedent for their existence.

Interestingly, there is zero proof of black cougars.

The general assumption with the thousands of “black panther” sightings in Texas is that these are black or melanistic cougars. The problem is there has never been a melanistic cougar observed by science either in a zoo, captive setting, killed by a hunter, mounted by a taxidermist or otherwise positive identified.

Melanism is when a hyper amount of black pigment dominates coloration of an animal. It happens in many animals ranging from squirrels to whitetail deer. Melanism is not uncommon in leopards in certain parts of their range as well as with jaguars. The black cats you see in zoos and on television are all melanistic leopards or jaguars.

There is one grainy black and white photo of a cougar killed in Costa Rica in the 1950s that is very dark but that photo is questionable and on close examination looks chocolate brown instead of purely black. There are dark brown cougars but no melanistic ones we are aware of. For melanistic cougars to be the answer to Texas’ “panther” question there would have to be many of them and there is no proof of any of them.

In the past we have addressed other possible answer to “black panther” sightings including the jaguarundi, jaguar, melanistic bobcats and domestic house cats.

It is rather ironic there is more proof for white cougars than there are black ones out there since so man attach cougars to the black panther phenomenon. My personal opinion is that those sightings are cases of all of the above listed species being sighted and virtually no on realizing there is no species called a “black panther” so anything that looks like it could be gets  the label.

And while we are on the subject of misidentifying cats, there are two mammals in Texas often called “cats” that are not really cats at all.

The ringtail is often called “ringtail cat” but is actually a member of the raccoon family.

According to Texas Parks & Wildlife Department officials, the ringtail is a cat-sized carnivore resembling a small fox with a long raccoonlike tail. Its bushy tail is flattened and nearly as long as the head and body, with alternating black and white rings.

These animals are almost wholly nocturnal and spend the majority of the day sleeping in their dens. They leave their dens at night to feed. Ringtails eat a wide variety of foods. Birds, rodents, carrion, reptiles and amphibians, and insects such as grasshoppers and crickets form the bulk of their diet, although they also eat native fruits and berries as well.

Ringtails are distributed statewide, but uncommon in lower Rio Grande and Coastal Plains of southern Texas. They are most abundant in the Texas Hill Country, Panhandle and Trans Pecos.

The spotted skunk is sometimes called a “civet cat” although they are no cat at all.

According to the Texas Wildlife Diversity program, spotted skunks are the smallest skunk, and fairly slender and weasel-like with males normally less than two pounds and females at around one pound.

“It is distinguished from the striped skunk by a white spot on the forehead and one in front of each ear. On its ventral side, it presents six stripes on the anterior of the body, and a pair of interrupted white stripes on the posterior along with paired spots on the rump and base of the tail.”

The subject of wild cats over the years has drawn more interest than any other on these outdoors pages. If anyone has photos of wild cats, send to chester@kingdomzoo.com. We would love to put them in our “Critter Cam”.

To contact Chester Moore, email him at chester@kingdomzoo.com. You can hear him Fridays from 6-7 p.m. on Newstalk AM 560 KLVI or online at www.klvi.com.