BEYOND THE STORM — Meeting their needs: Lamar State… 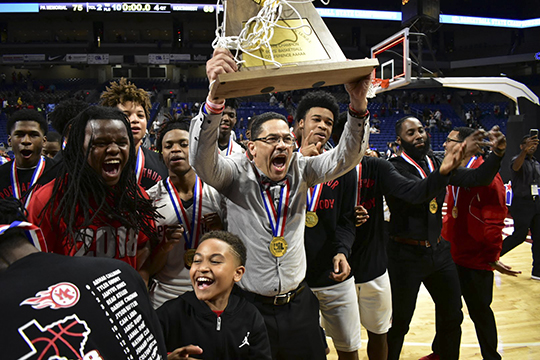 The Memorial Titans celebrate their victory in the 5A State Championship on March 10 in San Antonio. (I.C. Murrell/The News)

BEYOND THE STORM — Looking up for the city: Residents express optimism about recovery from Harvey

Almost seven months after Tropical Storm Harvey wrecked the city, many of its residents were celebrating a big accomplishment from 15- to 18-year-old boys that took place a week earlier in San Antonio — but hadn’t been celebrated in Port Arthur in 23 years. One of the city’s high school basketball teams won a state championship.

“It was such a positive environment,” said Alden Lewis, one of the assistant coaches of the Memorial High School Titans. “It was such a great thing when people showed up and showed out.”

Show up and show out, they did.

Hundreds, maybe thousands of Port Arthurans lined the Port Arthur side of State Highway 347 from the Jefferson City Shopping Center all the way to Memorial Stadium, small kids waiting for the next bag of candy to satisfy their appetites and older people capturing the moment on their cell phones. Head coach Kenneth Coleman and most of his staff road on the crane of a fire truck showing off the UIL 5A state championship trophy, their excitement as lively as it was when the final horn of their team’s 75-69 win over Justin Northwest blew.

Through the seven-game playoffs, the team’s mission went beyond trying to win a championship.

“We need a reason to smile,” Memorial head coach Kenneth Coleman said following a semifinal victory over Midlothian. “And I know basketball — when we were making some of those runs to state, [those] were some of the best times in my life. I definitely want Port Arthur to experience that.”

The championship has proven a much-needed respite for a community still rebuilding from the effects of Harvey, what many call a 1,000-year storm because of its epic impact.

Coaches including Coleman’s staff kept in touch with their student-athletes from the moment Harvey touched down in PA, checking on their safety.

“Communication is key, whether it’s meeting up, talking on the phone, hanging out after practice and finding out what’s going on in other people’s lives and going to events outside of school and all of that,” Lewis said. “Like I told coach Coleman at the beginning of the year, we reached out to every kid and made sure every kid was safe, especially when you’re all in the same community.”

School didn’t begin in Port Arthur until three weeks after the original start date because of Harvey. Some students, including football players, were displaced to begin the school year, even as football teams across Southeast Texas hurried to keep their athletes together and begin what would become a partially compressed schedule to finish the football campaign in time. The Memorial Titans, Nederland Bulldogs and Port Neches-Groves Indians continued to draw large crowds to their games as citizens had an outlet from all the work on their damaged homes and a common place to celebrate something together.

Meanwhile, the Memorial boys basketball team was preparing for the season to begin in November with athletes and coaches alike still not inside their own homes. Lewis said the team’s togetherness was a key ingredient in their success.

“They felt so displaced and out of pocket,” he said. “They need friends and family, and even teachers and coaches. They felt the need to be a part of something. It was such a big shock after the hurricane. That’s one reason we were happy to bring a championship back to Port Arthur.”

Memorial Baptist Church, which sits in the middle of the city at 4011 Memorial Blvd., was destroyed by Harvey, leaving Pastor Bill Brazell and his congregation to worship at First Baptist Church Nederland until late November.

“The total impact, both the physical damage to our church and our homes and the mental toll it took, was devastating, discouraging and depressive,” Brazell said. “It was only by the grace of God sustaining us that we were able to overcome it.”

Before the church even began to rebuild, congregations from all across Texas sent donations to Memorial Baptist for relief efforts.

“God in his word always encourages us to be a witness for Christ in every circumstance, no matter how difficult,” he said. “So, we have to ask ourselves how can we be the most effective witness for Christ in the face of disaster or tragedy? Quitting is never the answer. Christ has promised that he would build His church. He simply calls us to partner with us in that process.”

And organizations have partnered with Brazell’s church.

Christian Aid Ministries, whose main office is in Berlin, Ohio, is a nonprofit organization of conservative Anabaptist groups who minister to people around the world from food and clothing distribution to cleanup and rebuilding efforts and medical clinic operations. Each team from CAM has worked to rebuild three to four homes per week for four weeks at a time while also doing work on Memorial Baptist.

“It’s very satisfying and fulfilling to know we are able to continue to point the people of Port Arthur to Christ and his church as we fulfill His mission.”

Tammy Kotzur, executive director of the Port Arthur Convention and Visitors Bureau, said the perception of potential tourists and visitors that the Texas Gulf Coast has been damaged has become an issue her organization has worked against.

“This time of year, we get a lot of winter Texans [those who come south] and bird watchers, and the thought is that the whole coast is damaged,” she said. “Battling that, of course, the park is open. The coast is open.”

The PACVB, Kotzur said, has taken to digital and print advertising to try and correct the perception, but noted that hotels have high occupancy as a result of citizens displaced from their homes.

Kotzur said she only hears positive feedback from visitors regardless of the condition PA is in, but she understands the annual festivals also give locals a reason to get out of their dwellings and take part in something fun.

“I think the citizens like needing a bit of a distraction, but you have the financial hardships, so they want the events to happen, [and] they want them to be successful,” she said.

Lewis and Brazell share a common view of Port Arthur that the city whose fortunes once rested on the growth of the oil industry in the early 20th century is on the rebound.

“The mood of the city is positive right now,” Lewis said. “It’s exciting with the way the events have been. Yes, we had that horrible event, but positive things have happened.”

The positive happenings like the state basketball championship have come at a time when locals’ spirits were ready to be lifted. But Lewis also cautioned the recovery of the city has been slow because of the limited number of contractors, which has caused many locals to still be displaced from their homes.

“The city is on the up and up,” Lewis said. “It’s a slow recovery, but we’re moving forward in the recovery from Harvey. We’re looking to a full recovery.”

As is Brazell, whose outlook reveals a forecast of positivity from a higher calling.

“I see an optimism among many of the people as a result of the people that God has sent to us to help us recover,” he said. “Those people have been used by God to encourage us and to lift our spirits, and I see that over and over again in the lives of many who have been affected by Harvey.”