BEYOND THE STORM — Rebuilding together: A look at… 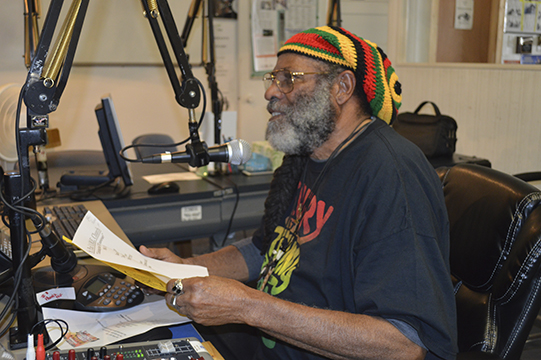 BEYOND THE STORM — One person’s story: Radio host faces ‘comedy of errors’ for storm recovery

He was the last person to leave the Greens Apartments on Turtle Creek Drive in Port Arthur on Oct. 13, 2017. While there, he experienced mold, maggots, flies and termites following Harvey. Afterward, he became homeless and lived in his vehicle or slept on the couch at the radio station for months until he recently found another place to live.

The night Harvey flooded, he awoke to the sound of the refrigerator’s electricity crackling.

He added that Brenda Pratt, apartment manager, was very helpful and ensured everyone’s safety at the complex.

Two weeks after Harvey he had to fight off a robber in his apartment. The robber left.

Plus, he said he has had trouble getting emergency aid from federal and charitable agencies.

“It was devastating,” Wright said. “Workers were doing demolition inside and I lost a lot of stuff.

“My youngest daughter saw how I was living and she cried. She said, ‘You can’t do this. You can have my bedroom and I’ll sleep in the relaxer chair.’ They made me feel welcome.”

Before that, however, there were no vacancies in hotels and the Federal Emergency Management Agency kept rejecting his loss-for-personal-property request. He made an appeal and he was told to go to the Small Business Administration. Oddly enough, however, Wright was reported to their fraud unit. They claimed he was dead, he said.

He was told the Internal Revenue Service reported him dead in 2010, even though he kept filing income taxes.

“I don’t know how that happened,” he said. “FEMA rejected me again because they said the SBA gave me something. FEMA took the money back. The SBA loaned it to me so I could pay them.”

Wright is a veteran and said he did get some help from the Veterans of Foreign Wars in Oklahoma and a group in Austin. The American Red Cross, however, was a different matter. He said he couldn’t log into their site. He was informed to go to their office in Orange, but it was closed. Eventually the deadline passed and he missed out.

“It was a comedy of errors and a Catch-22,” Wright said. “My main concern is not about me. Renters are taxpayers too. There are families still displaced and the biggest homeless population is renters. What about the renters?

“I’m still having nightmares. When the clouds roll in, I get antsy.”