BEYOND THE STORM — Business is booming: Billions of… 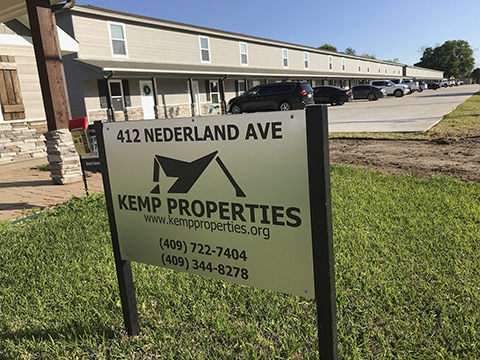 BEYOND THE STORM — Where will we live?: Flooding prompts area residents to think differently about housing

When Port Arthur Mayor Derrick Ford Freeman famously told the world via social media that “Our whole city is underwater right now but we are coming!” during Hurricane and Tropical Storm Harvey, he was mostly right.

About 80 percent of the city’s almost 24,000 housing units — many of them aging and worn — were affected by up to 60 inches of rainfall that fell on the city in late August 2017, planning director Ron Burton said.

Seven months later, that catastrophic flooding — rain fell in “biblical proportions,” Jefferson County Judge Jeff Branyck said — is part of the everyday lives of people in Greater Port Arthur and Mid County. Many of them are still seeking resources from the Federal Emergency Management Agency, awaiting flood insurance checks or resorting to private savings to rebuild or buy homes. They sift through lists of reliable — or not so reliable — contractors for repairs and wait for some return to normal lives. That can’t come without permanent lodging.

• Inventory of available homes in the market is “very low,” said Sandra Harris, association executive for the Port Neches-Port Arthur-Nederland Board of Realtors. In fact, the supply of homes in Beaumont-Port Arthur is down to 2.9 months worth; a healthy sales market has at least four months of product.

• Much of the land in the southern reaches of the county — marshland — cannot or is unlikely to be developed. Mid County communities are mostly built out. Some realtors point to Fannett as the next real estate “frontier,” with the right mix of available land and acceptable public schools.

At least for now, Burton said, the city’s “first efforts are more coordinated with FEMA than ever before.” That means Port Arthur will encourage hazard mitigation and long-term resiliency.

The city’s planning document, “Imagine Port Arthur,” released this year, includes reference to the Jefferson County Hazard Action Plan of 2011. Among action items for Port Arthur: acquire flood-prone properties, elevate flood-prone structures and infrastructure, replace and upgrade infrastructure like bridges and culverts, construct or improve retention and detention ponds. This might be the most important: “Require all new construction to meet/exceed minimum established flood elevations.”

In some cases, the city, with federal support, will try to buy property from people who’ve suffered “repetitive losses” due to exposure to hurricanes and floods. In short: Buy people out and encourage them to move elsewhere. That way, the land can be cleared and used as green space or improved to meet FEMA standards for flood-prone areas.

It’s not always easy to convince people to take such deals, Burton said. Some Port Arthur flood-prone properties that have flooded repeatedly are owned by elderly residents who are too weary to move and start over.

“This flood, though, a lot of people are thinking differently about it.”

There’s more still to the city’s outlook than loss prevention and mitigation. Some see opportunity that’s peering above a present landscape of gloom or weary acceptance about Greater Port Arthur’s lot when it comes to flooding and disasters.

Burton is one optimist.

“We are also focusing on how we can improve our region,” which is part of the city’s longterm plan,” he said.

It’s not necessarily a pipe dream. Port Arthur holds some valuable cards, chief among them cleared, available land in the downtown area that didn’t flood during Harvey. Land that didn’t flood comes at a premium in this county.

Burton said people might’ve thought that downtown, along the waterfront, would have flooded first. Because it didn’t some investors are giving it a second looks for new construction.

“What we are doing, we’re looking at the downtown area, looking at the storm-water infrastructure area,” Burton said. That area, with many lots cleared and others available, wide streets, access to city offices and some agencies, and Lamar State College Port Arthur, holds some allure to prospective investors.

“It offers some alternative sites for building to people who’ve been flooded repetitively,” Burton said. “When we get plans together, we can provide residents with options.”

In fact, he said, people have already approached Port Arthur about available land and its cost. There is talk of residential projects downtown by private investors, not unlike those suggested in the city’s 2015 Downtown Revitalization Plan. That plan focused on downtown from the waterfront to Rev. Dr. Ransom Howard Street, from Houston Avenue to Lamar Port Arthur, and it included a mix of low-density and medium-to-high density residential, along with office space, retail and commercial property, and mixed use.

Alam Farias, principal architect at Architect’s Studio on Procter Street, believes his company beat the rush to downtown by locating there over a year ago. He said the city is on the right track with its plan, and he hopes city leaders will stick to it.

“There is concern about drainage,” he said. Newer city ordinances encourage use of retention and detention ponds and use of green space, which creates less demand on the city.

A key factor, he said, is communication across boundaries.

“Look at Port Arthur as a whole. Look at the county as a whole. Everything needs to work together. Cities and the county must communicate about drainage.”

He said downtown comes with some stigma; some people believe it’s dangerous. But, he said, there’s not a lot of commercial or social activity downtown, even at night. In fact, it’s a largely a blank slate where development can start over, a great place to build. It holds potential for residential development.

How to build: high

As important as where to build is how to build, he said. Construction ought to move away from building on slabs and build on piers. That, he said, would give home or business owners some room for comfort during flooding.

As an architectural student at the University of Houston, Farias participated in the Make It Right Foundation in New Orleans’ Ninth Ward after Hurricane Katrina. There, architects did prototypes on homes similar to beach houses, giving them some rise over flood-prone land. Some ideas were adapted from architectural practices in the low-lying Netherlands.

As part of a class project, Farias himself designed a multifamily house of shotgun design, with a camelback design and upstairs lodging to house extended family during times of disaster. The house would rest on piers and elevate as needed during floods, perhaps to 10 or 12 feet.

“We need to rethink how we build in low-lying areas,” he said. Slabs are not ideal. “Elevating would help. Providing crawl space is better. You can use the ground to absorb (flood) water.”

Investors are buying ramshackle homes and repairing and improving them. They’re considering moves to North Beaumont, Orange County, Port Arthur and even in areas flooded by Harvey that hadn’t flooded before. Chances are, some buyers say, they won’t see a flood like Harvey again.

But Post-Harvey, new homebuyers are open to doing something new.

This story appeared in Volume 3 of The Port Arthur News Profile, April 22, 2018