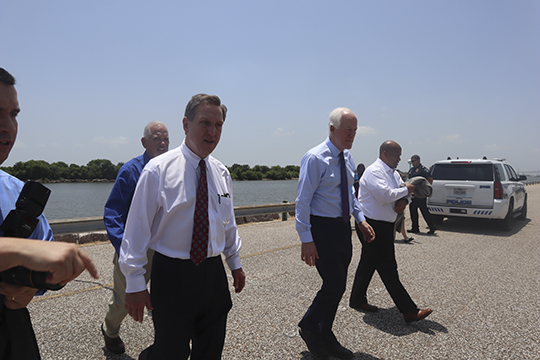 “The main reason I wanted to come back was to announce that we did receive $5 billion for the state of Texas for flood-mitigation projects,” Cornyn said. “Ordinarily, when you go to Washington and ask for money after a disaster like Hurricane Harvey, they ask what you need to clean up the mess. Then, we tell them that we want to prevent future flooding.

“That’s when they tell you to come back and talk to us during the annual appropriations process. We were able to, as a result of Congressman (Randy) Weber, Congressman (Brian) Babin and the whole Texas delegations’ effort, we were able to do a good job working with Gov. (Greg) Abbott to make sure that Texas’ needs were taken care of.”

Of the $5 billion, $881 million will be spent fortifying levees in Port Arthur.

Port Arthur Mayor Derrick Freeman said that getting the levees fortified will give citizens a peace of mind.

“The levee, before Hurricane Harvey hit, was a concern to us, also,” Freeman said. “When our citizens found out about this levee being breached, it was serious. People were highly concerned. We actually had to do a town hall meeting to tell the citizens what we were doing to repair or remediate — just to get the concerns down.

“One of the greatest rumors that we had once Hurricane Harvey hit was the belief that once we got the flooding, the levees would break. Even if they didn’t understand the difference between storm surge and flooding, it was a great concern to our citizens. We thank (Cornyn) for just giving us a peace of mind that we’re going to get this fixed.”

“Getting projects prioritized and funded is not an easy task,” Cornyn said. “I know it’s aggravating how slow things are going, but we are making good progress. We have some long-term projects that we need to complete here. The population of this area of the state and the importance of the region to the nation is just continuing to go up and up.”

Cornyn said that, of the $5 billion being granted to flood mitigation, the Port Arthur levee project is the most expensive.

“There is $3.9 billion for the planning and completion this flood protection project,” he said. “It will become a component of a larger storm surge system that will eventually protect the entire gulf coast.”

Branick said it was an honor to have Cornyn come to Jefferson County and he was thankful for his help to the area.

“He’s always had a listening ear,” Branick said. “I’ve always been able to get his attention about issues facing Coastal Texas.

“We are home to 32 chemical plants like Huntsman and Chevron that make a constituent ingredient for virtually every product sold in the United States. I don’t think the value of Jefferson County for the nation’s energy needs can be overstated. We’re home to a bunch of hard-working people. (Cornyn) has been a great help.”