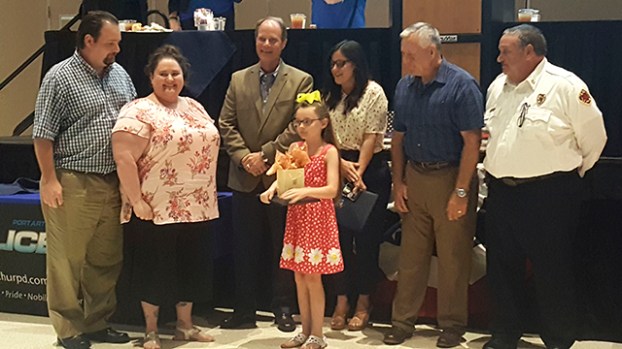 There were fires and wrecks and crime, snow and ice and flooding and events that could seemingly break an individual’s spirit — and there are the ones who rush in to respond to these situations.

This week, this group of men and women received recognition during the city of Port Arthur Police and Fire Awards Banquet at the Robert A. “Bob” Bowers Civic Center, held Thursday.

Award recipients for the PAPD included:

During Tropical Storm Harvey’s flooding, a woman and two children were trying to get to Thomas Jefferson Middle School and fell into a ditch with about 8 feet of water. Singleton, then a probationary officer, raced to help and was able to grab the children and hand them off to other officers and assist the woman.

The officers were able to save a man who was in a burning car.

Six-year-old Olyvia Pinney called 911 for help when her mother suffered a seizure and Gutierrez helped the child get the help needed.

Police Officer and Civilian of the Year — Awarded to all personnel of the department.

Award recipients for the PAFD:

The three were off duty at a concert at Ford Park in Beaumont when a woman collapsed. They did basic cardiac life support measures until emergency personnel arrived and continued until the person was sent to a trauma center.

Called to a scene where a vehicle was nose down in a ditch and witnesses were unable to wake the driver. The first responders were able to break a window and extract the victim, who went into cardiac arrest. Advanced life support measures were used and the person recovered at the hospital.

He crew helped an 87-year-old man in a wheelchair who had gone into cardiac arrest.

The crew performed lifesaving measures on an unresponsive 54-year-old man who went into cardiac arrest several times and saved his life.

W. Nim Kidd, chief of the Texas Division of Emergency Management, was guest speaker at the event, where he told of how he was on near-constant contact with first responders in the area during Harvey.

Mixing humor in his speech Kidd joked about the frequency of calls from Louie Havens, deputy emergency management coordinator and deputy fire chief, but also told of the seriousness first responders face daily.

“At a time when it’s the darkest hour and you don’t think it can get any worse, it can,” Kidd said. “Councilmembers, first responders, it’s our job to think ‘what if it does.’ People may think, well, no planes fell out of the air, there’s no Ebola…But yes, it can get worse.”

The annual awards banquet is usually hosted by the Port Arthur Neighborhood Action Council but many of the groups’ members suffered loss during Harvey. So this year Port Arthur Blue Santa stepped up to host the event. Proceeds will go to Port Arthur Independent School District to help purchase clothes and shoes for children affected by the storm.