Safety a must during holidays 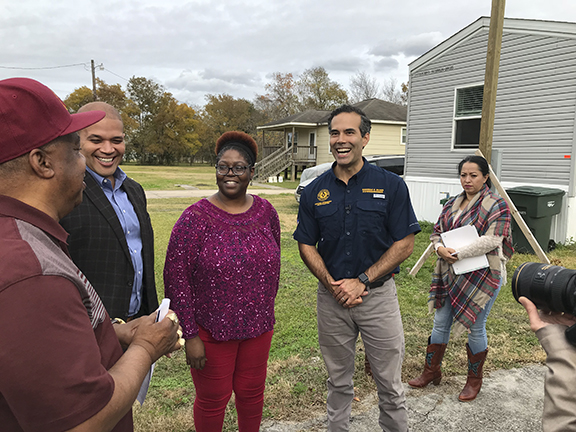 The home-health care worker lost her family home to the ravages of Hurricane and Tropical Storm Harvey in August 2017, when more than 5 feet of floodwater inundated the three-bed, one-bath wood structure that was built, two rooms at a time, by her grandfather’s hands starting more than six decades ago.

She’s been living in a Federal Emergency Management Agency mobile home on the 11/2-acre family property in Port Acres’ Montrose Addition for months, but a wolf was knocking at her door: FEMA was prepared to oust her and other local people from their temporary homes Feb. 25.

GLO officials told her Wednesday that decision has been stayed for six months for those who qualify for the extension. Bush had requested the extension for displaced Texans on Oct. 12.

GLO officials also handed to Owens a paper application and instructions for seeking federal Disaster Recovery money. Applications were made available online and at a regional office opened in Beaumont on Wednesday. GLO, a state agency, is overseeing application and distribution for the federal program.

Bush said Owens would be applying for some of the $205 million allocated for the Southeast Texas district homeowners including people in Jefferson, Hardin and Orange counties. He assured Owens and local officials that GLO has “a good team on the ground” to make sure hard-pressed homeowners will get a fair shot at securing needed funds.

“We are here to hear your story,” Bush told Owens.

District 4 Councilman Harold Doucet — Owens’ home is in his district — urged Owens to get her paperwork collected, processed and filed — now.

“The key to it is first come, first served,” he said. “When the funds are exhausted, they are going to cut it off.”

Doucet’s caution was a familiar refrain in Port Arthur: City officials have warned that Harvey is one of myriad natural disasters the federal government is addressing, and money is limited.

“There’s going to be a lot of people left out,” he said. “There’s never enough money.”

Jefferson County is among a dozen counties that have agreed to be part of a program that would allow displaced people to purchase their temporary housing units. The Port Arthur City Council will vote next week to join the program.

Bush said the option of selling the temporary units to eligible residents is “one more tool in our recovery toolbox.”

Freeman said he was optimistic that many promised federal assistance programs were nearing fruition. Even those homeowners who fall short on federal aid may find additional resources from private sources.

Port Arthur is offering its own “one-stop” shop where Harvey survivors can apply for aid starting Tuesday, when the office opens at 501 Procter St.

Bush visited Southwood Crossing Apartments in Port Arthur last summer to announce work on that multi-family complex when federal money was made available. He said Wednesday that work continues there.

For Owens, 43, the value of Wednesday’s announcements was more personal than political. She said she has gone through numerous efforts — stops and starts, over the years — to acquire federal assistance to rebuild or replace the family home, where she was raised by her grandparents following her mother’s death in the 1970s. She said she’s weathered numerous hurricanes at that site and evacuated for only one — Rita in 2005 — an evacuation that proved unnecessary.

She said the home site represents generations of memories of family members who’ve celebrated Christmases and Easters in the homey community near Montrose Park. She said she wants that same community atmosphere for her own small grandchildren.

She said as a child she and her cousins played on the site where her grandparents kept rabbits and ducks, pigs and turkeys and geese — “things you could eat,” she recollected — along with a lone guard dog.

She said she hopes she gets the help she needs, but added that her faith rests in God, not politicians.