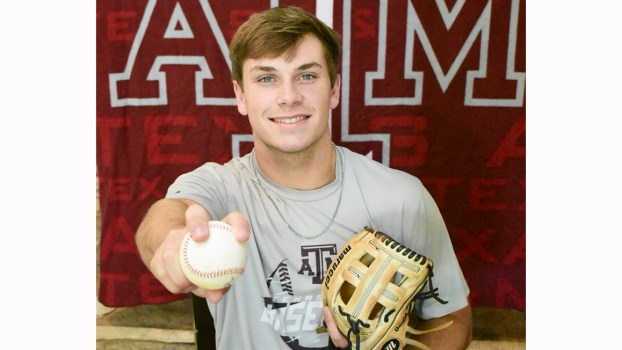 GROVES — For those who follow it, the junior college path to arguably the toughest conference in baseball (among other sports) usually takes two years.

Austin Bost needed just one year at Panola College to get to Texas A&M.

“We had a great year,” Bost said. “Coaches got me out there. I just played hard, and my stats showed that I played really good and caught A&M’s attention. They were watching me throughout the year, and finally at the end, we had a good finish. They talked to me in the end, and they gave me a good offer.”

The 2018 Port Neches-Groves graduate made the most of his opportunity in Carthage. He led NJCAA Region XIV’s East Zone in overall (19) and non-league (12) doubles, was seventh in overall home runs (nine) and 19th in overall stolen bases with nine (seven in zone play).

After batting .351 with 40 runs batted in and 38 runs scored, Bost announced in May he was taking his game to the Southeastern Conference, home to reigning national champion Vanderbilt and at least one national finalist in 11 of the past 12 years.

“It’s been my dream,” said Bost, a 6-foot-1, 195-pound third baseman. “Both of my parents went to A&M. I had a bunch of family that [went] to A&M. I’ve been dreaming about going to A&M my whole life, and finally, they recognized me and I got what I wanted.”

Younger brother Blake Bost, a PNG junior quarterback and outfielder, is not surprised Austin punched his ticket to College Station after one junior college season.

“No, not at all,” he said. “He works hard all the time. He works harder than anybody I know. It’s no surprise to me he’s going there.”

Austin Bost won the District 22-5A most valuable player award as a PNG senior, thanks to a .462 batting average, 38 runs scored, 16 doubles, a triple, a home run and a really nice glove for defense. In a bi-district playoff game against Porter, Bost dove to stop a line drive in the fifth inning. Two innings later, he made a vertical leap to stop what would have been a base hit, one at-bat before throwing out the last runner at first to seal a series-clinching 3-1 win in Port Neches.

The previous fall, months after helping PNG win the 5A state championship, Bost had signed with Panola.

“Panola, they wanted me out of high school,” Bost said. “I knew that was the place I needed to go to go to a higher level, the next level.”

“Absolutely,” Carter said. “I thought so, but I’m not a Division I coach. I thought Austin was the total package out of high school, but I also thought Panola helped him with his game, too.”

Panola went 38-16 overall and 20-10 in Region XIV East to finish second this season. Meanwhile, A&M went 39-23-1 and lost to Duke twice in the Morgantown, West Virginia, Regional of the NCAA tournament. The Aggies have not missed the NCAA tournament since coach Rob Childress’ first season in 2006 and made their sixth and most recent College World Series in 2017.

Bost has talked with 2016 PNG graduates Ryan Leckich (now a Baylor pitcher) and Carter Henry (University of Houston pitcher) about competing on the major-college level. Leckich has earned multiple Academic All-Big 12 awards, and Henry was named to the National Collegiate Baseball Writers Association Stopper of the Year Award watch list in February.

“I’ve talked to them a little bit,” Bost said “They’ve prepared me, and I’ve talked with them, and I’m close with them, so it’s good to have that contact.”