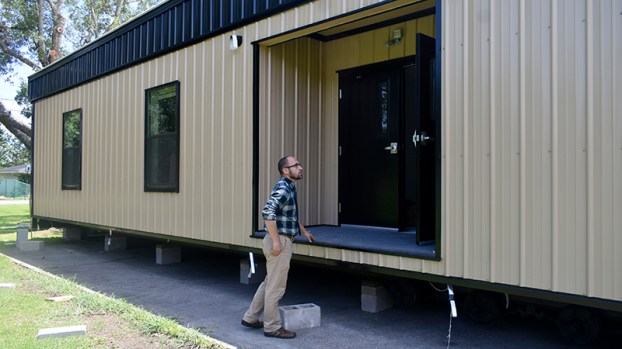 Lance Elizondo, Bob Hope Elementary School campus director, looks at one of the new modular buildings that will serve as a classroom at the growing campus. (Mary Meaux/The News)

Bob Hope School operates two Port Arthur campuses, one for grades six to 12th, which earned a B; and an elementary school campus serving prekindergarten to third grade, which earned an A. TEA shows the district with 86.8% Hispanic population, 80.4% economically disadvantaged and 45.7% English language learner.

The scoring system in place rates districts and schools, giving them an overall score based on three performance areas:

In addition, the A-F accountability uses a variety of indicators such as graduation rates, college, career and military readiness, SAT/ACT scores, and college prep course completion.

The way the system is set up, districts and schools are awarded with improvements.

The district, which is in its 10th year, has open enrollment so they will continue to have the occasional student come in not on his or her grade level, Lopez said.

“We are still very proud of our 89 and the elementary campus received an A,” he said.

But even with a high number of English language learners and economically disadvantaged students, Lopez said they want to make sure they do not use excuses.

“We work with them all,” he said of the students. “We look at each of them individually. We had a meeting (Monday) morning looking at all of the individual kids, the support classes, tutoring program, all of that is a combined effort, teamwork. We have a team here working to get the best out of everyone.”

Some years ago a bill was passed allowing young adults ages 21 to 26 an avenue to earn a high school diploma as opposed to a certificate. This is done in a separate location so as not to mix the adults with the high school students.

The first such graduating class was in 2015 and since then other criteria has been added to grade school districts – college and career readiness and military readiness.

It’s up to the school district to quantifiably show they had the students college or military ready, but with the older students, that’s a bit different of a situation though scored in with the younger students.

Richardson said the school’s older students were on a different track when they were in high school the first time and their endorsements were different.

“And there are those who do not want to talk to the military and some that opt not to go to college because they are already working and now we’re penalized because there are not enough students taking the college exam or meeting with the military,” Richardson said. “And because we didn’t meet that standard it brought us down to C (for the high school campus).”

But Richardson isn’t worried. The overall score shows progress is being made and the gap is closing.

“We do a lot of great things,” she said, ticking off a list of accomplishments. There was a trip to Cleveland, Ohio for students invited a Housing and Urban Development, Science, Technology, Engineering and Mathematics innovation network event where the Port Arthur students were standouts. There was interaction with the president of the NLF national hall of fame, a memorandum of understanding with Johnson Space Center and more.

The demographics are a bit different at Tekoa as compared to Bob Hope School — Tekoa is 90.5 African American with 95% economically disadvantaged students but the goal of excellence is at both charter schools.

“We will have an A next year across the board,” Richardson said.