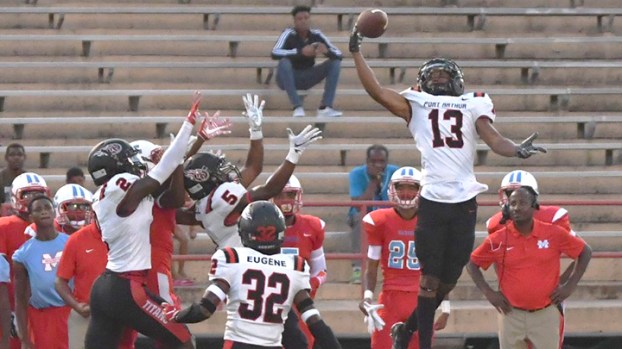 Jaylon Guilbeau of Memorial nearly intercepts a pass with three teammates coming to the ball as Houston Madison coach Shawn Narcisse, bottom right, looks on during Friday’s game in Houston. (Jereem Augustine/Special to The News) 9-6-19

HOUSTON – Kason Williams celebrated his 18th birthday with a game-high 55 rushing yards and two touchdowns as the Memorial High football team cruised to a 35-0 victory over Houston Madison on Friday night at Butler Stadium. 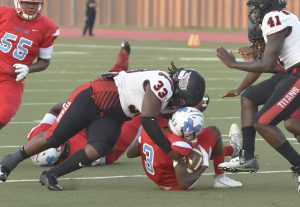 Keoni Evans (33) of Memorial brings down a Madison runner during the first half Friday in Houston. (Jereem Augustine/Special to The News) 9-6-19

“He’s always been a good player, and we are excited to have him on the field,” Titans head coach Brian Morgan said.

Memorial (1-1) earned its second shutout of the Morgan era, outgaining the Marlins (0-2), 226 to 126. Although the Marlins completed five passes, three of them were for negative yardage, so they finished with zero passing yards.

The Titans’ defense was especially dominant in the first half as Madison didn’t complete a pass – or pick up a first down – until nearly halfway through the second quarter.

Memorial scored on the first play from scrimmage when quarterback Jah’mar Sanders threw a short shovel pass to Tyrence Augusta, who ran it 60 yards for the score.

Later in the first quarter, the Marlins inexplicably punted on third down. The punt was blocked by the Titans and recovered by Donaven Jackson in the end zone for a touchdown.

With 7:29 left in the fourth quarter, Jackson was called for a personal foul and ejected from the game. As a result, he will also miss the first half of next week’s home opener vs. Beaumont United.

“He reacted, and it was unfortunate,” Morgan said. “We addressed at halftime that something like that could happen with the game getting out of hand.”

Sanders, who finished with 102 passing yards, a touchdown and two interceptions, left the game with 4:35 in the third quarter with a bruised thigh.

Morgan said Sanders is fine and will be ready to play against Beaumont United next week. He said the Titans had only planned on allowing Sanders one more series, when the minor injury occurred.

Brian Milton came into the game for the Titans, completing 3 of 6 passes for 47 yards, a touchdown and an interception. The touchown – the Titans’ final score of the evening – was an 11-yard pass to Augusta with 5:14 remaining in the game (Augusta’s second touchdown of the game).

Memorial didn’t have any penalties until the 29 second mark of the first half, at which point they collected three in a span of 26 seconds.

Madison finished with 13 penalties for 90 yards. That, combined with the Marlins’ propensity to attempt fourth down conversions inside their own 20-yard-line, resulted in favorable field position for the Titans.

Williams scored his first touchdown of the game on a 19-yard second quarter run, just after Madison had turned the ball over on downs.

Three of the Titans’ first four games this season are in Harris County, including the district opener on Sept. 26 at Galena Park.

By Michael Sudhalter, Special to The News