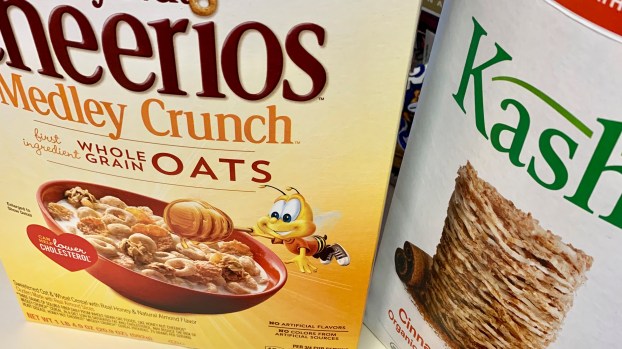 Is this cereal judging me? Shopping for others isn't easy. (Darragh Doiron/Special to The News)

She had a list of three ingredients. How hard could that be?

I joked that I had “issues” with every single item of her longer list, but this was for cereal, cheese and SPAM. What is my gourmand, cookbook author mother going to do with SPAM? I dunno, but I was IN this thing.

I had to call her twice and seek professional Walmart help for the third thing.

Cheerios came in a dozen varieties, but not the one she wrote down. Something about clusters. I thought they were just Os. The shelf offered frosted, chocolate, peanut butter, regular, peach, honey nut this and that, multigrain, maple, oat crunch, blueberry, apple cinnamon, very berry, gluten free and some other things.

I called Mom. We worked something out.

She actually wanted some Kashi, too, so I kept her on the line and we went through those many varieties.

Then there was SPAM, of which I’m not a fan, but can tolerate being innovative with whatever is left over from hurricane season. SPAM comes in jalapeno, turkey, hickory smoke, bacon, hot and spicy, classic, reduced sodium, lite and more.

I called her a second time, and we chose the reduced sodium. Win-win?

There was a wall of cheese offerings, but I didn’t see the little individually-wrapped ones she asked for. Thankfully, an employee passed by and directed me to deli.

“Thanks, I was about to cry a little bit,” I told her.

“That’s what we’re here for,” she cheerfully responded.

“Cultural Insurrection: A Manifesto for the Arts Agriculture and Natural Wine” may require that you have two things nearby as you ingest Jonathan Nossiter’s writing: a glass of wine and a dictionary. I haven’t heard some of those terms since Dr. Roth’s film genre class at Lamar University. Nossiter is in the cinema business and this book relates film to wine and “cultural wine” of our society. He discusses the threat of an ecological apocalypse, both environmental and cultural, and he has rekindled and interest in my viewing some classic films I’ve not yet studied. He has also made me aware that my $7 supermarket wine isn’t cutting it. Here’s an FYI: He mentions the movie “Paris, Texas.” I hear they filmed a segment at the Keyhole Club in Port Arthur. Anyone here have a story about that?

Darragh Doiron is a Port Arthur area foodie ready for more pumpkin spice updates from readers. Reach her at darraghcastillo@icloud.com