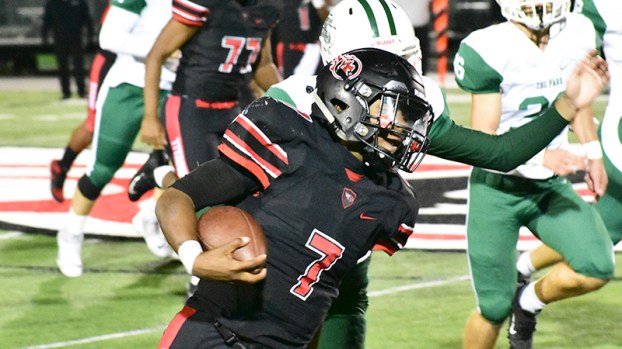 The Kingwood Park Panthers held firm throughout a cold and windy night in Memorial Stadium, keeping the Memorial Titans scoreless except for the very beginning and very end of the game, ultimately taking home the win 20-13 Friday night. 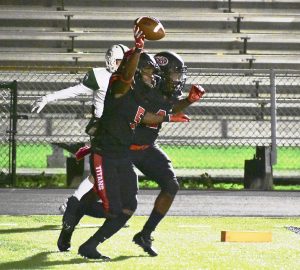 Jatavian Neal (5) of Memorial signals an interception he made before going out of the back of the end zone with teammate Colton Mitchell in the third quarter Friday in Port Arthur. (I.C. Murrell/The News) 10-25-19

Kingwood Park responded with a long, 75-yard drive that ended with quarterback Hudson Dezell running the last 10 yards on three carries for the Panthers’ first score. With the failure of Memorial’s 2-point conversion, the Panthers led 7-6 toward the end of the first quarter.

Afterward, the Titans had trouble making first downs. They punted on their next possession and turned the ball over on downs on the series after that. This second time set up the Panthers to drive for 38 yards down to the Titans’ 26. The Titans kept them there and the Panthers’ Thor Jeager kicked a 33-yard field goal to push Kingwood Park’s lead up to 10-6 in the middle of the second.

Closing out the rest of the second quarter, Memorial was again frustrated offensively, punting twice more. Kingwood Park took found good fortune on their last possession of the first half with a short Titans punt to their own 36. The Panthers covered the rest of the ground to the end zone on long passes and a final carry by Dezell for the second of Kingwood Park’s touchdowns. The half ended at 17-10 Panthers.

Titans quarterback Jah’mar Sanders found new openings in the second half, rushing for 88 yards on 10 carries. In the third quarter, Kingwood Park frustrated the Titans blocking a 13-yard field goal attempt, and Juan Garcia started the Panthers’ next possession with a 40-yard reception. Four carries by Dezell and one by Garcia brought the Panthers close enough to make a 27-yard field goal of their own. The third quarter ended the Panthers ahead 20-6.

Memorial had its own long receptions in the fourth. Branden Chaney racked up 42 yards on a pass from Sanders, but the Panthers’ defense kept Memorial from making another firstdown, taking over on downs at their own 19.

Some life came back to the Titans late in the fourth on their next carry, with the Titans’ final drive led by both Sanders and quarterback Brian Milton, who took some snaps after Sanders suffered an injury. Sanders returned to make a wild 13-yard pass to Alex Ned while under pressure, who then ran in for the last score of the night for Memorial. The Panthers held on to the ball for the final 3 minutes.

The Game Changed When…

Alex Ned caught what might have been a nigh uncatchable pass from Sanders, running from Panthers defenders, converting it into the Titans’ second score of the night and putting them within one possession of Kingwood Park.

The Panthers, however, didn’t give Memorial the chance for another drive, taking knees at the end to run out the play clock.

The Game Ball Goes To …

Jah’mar Sanders, who, after an injury, came back to put more points on the board for Memorial, and for carrying the Titans throughout the game on his 10 carries.

Memorial will travel to Houston to face Wisdom (0-7, 0-4 before Friday’s game against Porter) at 1 p.m. on Saturday, Nov. 2, at Butler Stadium.

Kingwood Park will head to Houston to take on Austin High School (2-3, 1-3 before Friday’s game against New Caney) at 7 p.m. Friday, Nov. 1.