Thieves use stolen vehicle to rob Nederland ATM of… 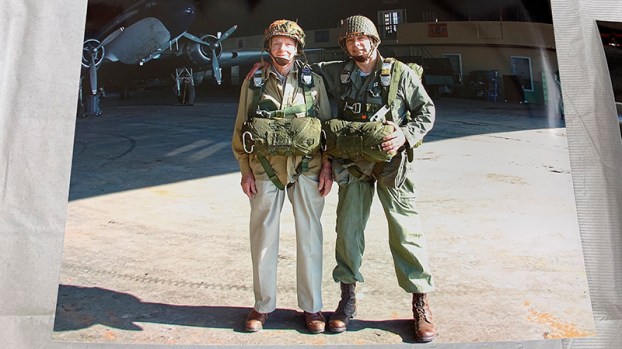 Fred Brown, a longtime Port Arthur resident, was a paratrooper for the 517th Parachute Regimental Combat Team for the United States Army during World War II. He was honored with the medal of Knight in the French Order of the Legion of Honor Thursday in a private ceremony at the Groves Activity Center. (Cassandra Jenkins/The News)

GROVES — Fred Brown had never been in an airplane. In April 1943, he volunteered to jump out of one.

Drawn by the challenge and the cool looking boots, Brown became a paratrooper in the 517th Parachute Regimental Combat Team for the United States Army, spinning him into the dangerous journey of World War II.

Fast forward 70 years, and the young man who had never stepped foot in an airplane has become a decorated veteran. Thursday, he added one of the most prestigious French awards to his belt — the medal of Knight in the French Order of the Legion of Honor.

Alexis Andres, the Consul General of France in Houston, presented the medal to Brown Thursday at the Groves Activity Center. As the metal gleamed in its new spot on his jacket, Brown’s eyes glazed over as memories of the war wisped through his head. 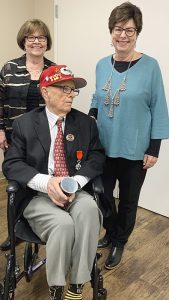 “One thing I remember about the war, and what helped get me through it, was brotherhood,” Brown said. “When you’re fighting a war, you make a lot of friendships you never forget after going through combat together.”

Brown said the brotherhood that he had will always hold a special place in his heart, as will the memories of his family.

In 1943, Brown was drafted only weeks after meeting the love of his life, Verda Verdis Scott Brown— a young woman who vowed to wait for his return.

“When I got home, my wife told me she would wait for me,” he said. “She did and we got two beautiful daughters out of it. She was a great wife, she died in 2006 but I remember thinking of her during the war and I missed her. I knew I had to make it home to her.”

Brown said he also missed Port Arthur, a city that has been home to him since 1936.

Sitting in his chair, friends and family surrounding him, including his two daughters Lois and Becky Gregory, Brown looked back on every close call that almost kept him from the life he lives now.

“I had so many opportunities to have been killed,” he said. “But it didn’t happen. I think about that all the time, it’s always on my mind.” 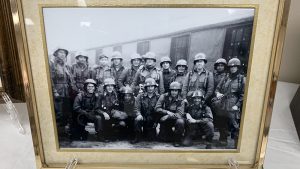 Fred Brown, a longtime Port Arthur resident, was a paratrooper for the 517th Parachute Regimental Combat Team for the United States Army during World War II. He was honored with the medal of Knight in the French Order of the Legion of Honor Thursday in a private ceremony at the Groves Activity Center. (Cassandra Jenkins/The News)

Brown fought in Italy before parachuting into Southern France. He fought German forces for 90 days during the battle for Col de Braus and the liberation of Sospel in the Maritime Alps.

Among other service medals, Brown also received the U.S. Bronze Star Medal for his bravery during the Battle of Manhay at the Battle of the Bulge. He also participated in the Rhineland Campaign that secured a route for the Allies into Germany near the end of the war.

Brown said with every fight, he wondered why the men next to him fell and he remained. A question he still has no answer to today.

He chalks it up to faith and guidance.

Upon returning home from the war, not yet 21 years old, Brown returned to Port Arthur with a new vigor and outlook on life. He married the love of his life within weeks and joined First Baptist Church where he became a deacon.

The longtime Port Arthur resident was active in Port Arthur civic affairs, a volunteer for the Lions Club and a longtime deacon at the First Baptist Church in Port Arthur. He is retired from DuPont Credit Union.