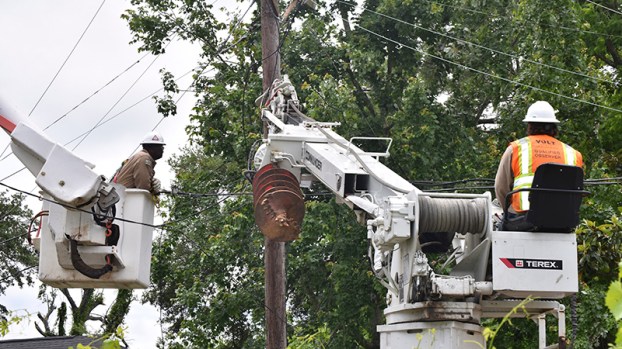 (Update: Entergy Texas said, as of 4 p.m. Wednesday, around 4,000 customers remain without power across Southeast Texas, down from nearly 20,000 at the height of the storm. In Jefferson, Hardin and Orange Counties, approximately 3,500 customers remain without power. Customers can sign up to receive alerts about their specifics outage or visit Entergy’s outage map for the latest information.)

Crews are working to assess damage and restore outages. Additional crews are being brought in to help in the restoration work, said Andy Schonert, communications manager for Entergy Texas.

Countywide there are about 10,000 customers without power as of 9 a.m.,

Schonert said, adding they would have a better idea of estimated restoration times once they are able to fully access all of the damage.

“So far, it looks like very strong winds and tree damage are causing a number of issues crews are coming across,” he said.

In Port Arthur, Mayor Thurman Bartie said he’s aware of some power outages in the city but hadn’t received any calls of major damage from the storm.

Nederland City Manager Chris Duque said there are some power outages. Wind was the biggest issue for residents there, and city crews are checking their buildings.

There were no reports of street flooding, Duque said, adding they hadn’t received many calls regarding the inclement weather.

Groves City Manager D.E. Sosa said power was out around city hall when he arrived Wednesday morning but the generator was on. Power was restored there around 7:20 a.m.

“I made it a point to drive through the city and checked with the public works director,” Sosa said. “Everything looks good with the exception of the power outage. There are no drainage issues or any issues with limbs in the street that I’m aware of.”