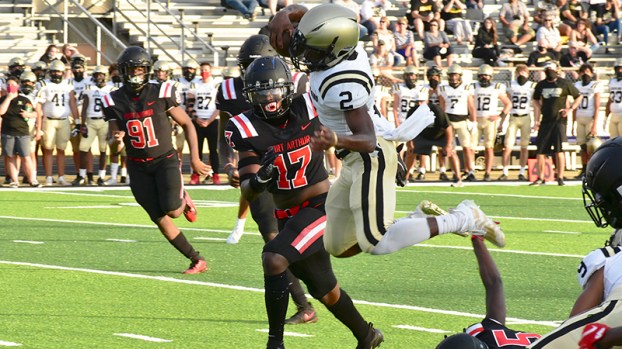 Nederland running back Josh Mazyck hurdles over Memorial defensive back Jamond Francis (15) as linebacker Darrell Thornton (17) tries to catch him Thursday during a scrimmage at Nederland. (I.C. Murrell/The News) 9-17-20

NEDERLAND — One dress rehearsal on the new Bulldog Stadium turf was all Rene Cunningham needed to show off his new quarterback skills.

Taking over for graduated Bryce McMorris, Cunningham threw touchdown passes to senior classmates Josh Mazyck and Kade Scott on the first and last drives of the first half, respectively, in leading Nederland to a 17-13 win over Memorial in Thursday night’s game-simulation scrimmage.

Cunningham had a strong outing after competing with Corbin Chandler for the starting role during preseason camp. Chandler ran the offense during the fourth quarter and made some key carries to melt some time away. 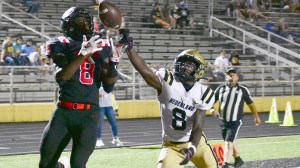 But Cunningham helped the Bulldogs get off to fast start. Mazyck took a screen pass from Cunningham and weaved 25 yards into the end zone on the opening drive.

Nederland’s defense came away with three first-half interceptions — one each by Jacob Kotz, Lalo Flores and Jaice Beck. Beck’s pick set up the second touchdown, which Cunningham set up with a strike to Kade Scott on a red-zone cross route as the first half expired.

Maleek Jones intercepted Chandler on the first play of the second half, and that led to the Titans’ first touchdown drive. Second-year starter Jah’mar Sanders floated a pass that was deflected and juggled into Tony Brooks’ hands to pull Memorial within 14-7.

Payne Barrow connected on a field goal later in the third period.

The second strings for both teams ran the entire fourth quarter, and Memorial’s Ilijah Williams — who lined up as a wideout on a few snaps — garnered some first downs on quarterback keepers in managing the final drive. He threw a short touchdown pass to Kelby Blanchette before time expired.

Memorial’s defensive front racked up a number of sacks, including one by Christian Thomas that stalled a Bulldog series in the red zone.

**This version has been CORRECTED to reflect Kade Scott caught a touchdown pass for Nederland.**