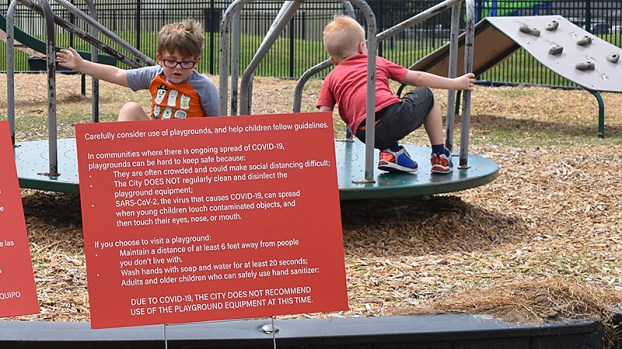 Charlie Dorr and William Kohl play on the merry-go-round at Doornbos Park in Nederland on Friday. (Mary Meaux/The News)

The City of Nederland is slowly opening up its public service buildings and quality-of-life options, but it is not a move garnering the full support of local leadership.

Council members voted unanimously this week for the phased reopening, but it was against the recommendation of City Manager Chris Duque and Nederland staff.

Yet, he was specific in stating such a decision should be delayed until Sept. 28 at the earliest.

“To be clear, the staff, we drafted that proposal, but we would not recommend that,” Duque told Council members Monday. “My recommendation would be, wait until Sept. 28. We are just now starting to get the Labor Day (COVID-19) testing impacts and we are now just going to start getting the back-to-school numbers coming in.

“We’re going to see the results coming in at the end of this week and next week. We can wait. If y’all want to move forward with this proposal and by the 28th things have gone backwards, then we just need to prepare to reverse course and go back and try to help. We don’t know. Again, my recommendation is based on this area on the side of cautiousness.”

Nederland City Council members appeared unanimous in support of the immediate reopening this week with no one voicing support for delaying the decision to Sept. 28.

The city council and city staff agreed to review the status of the opening Sept. 28 and subsequent meetings, leaving open the option to either ramp up the opening or pull it back.

Mayor Don Albanese is going to make the decision as to if the Sept. 28 meeting is open to the public. That decision has to be made before the city posts its agenda.

The issue is spacing, according to Duque, because the council chamber is tight and the extra tables installed to social distance have pushed public chairs to the side.

“They are looking at Monday through Friday having a schedule of 1:30 to 5:30 p.m. to be open to the public but having curbside service for the remaining hours,” Duque said. “The limitations they have would be no computer use at this time and they would limit attendance by the public to ten people at a time. They would have a staff member up front keeping track of the count of people coming in and out.” 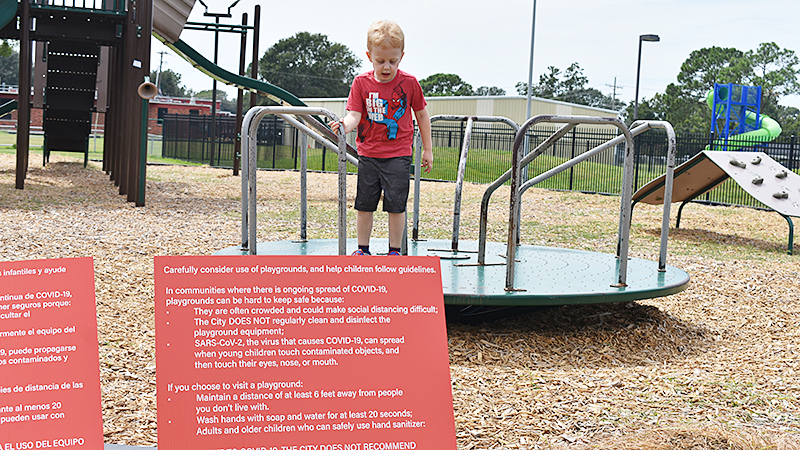 William Kohl plays on the merry-go-round at Doornbos Park in Nederland on Friday. (Mary Meaux/The News)

The Nederland Recreation Center is remaining closed because city officials said they need more time to work out protocols for close contact sports, mainly basketball in the gym.

The large pavilion is staying closed at Doornbos Park to avoid large gatherings, but the city is removing orange fencing on the playground and other recreational equipment at Doornbos, Carl “Cropo” LeBlanc Park and South 5th Street Park.

Nederland staff members are not cleaning or disinfecting the equipment daily. They are placing signage saying COVID-19 can be spread by touching contaminated objects.

“We want to keep the large pavilion closed,” Duque said. “We do not want to have a large congregation of people. Once that large pavilion opens up, that’s going to be a free-for-all, so we want to continue to keep that closed.”

In making the decision to open city services on a limited basis, Nederland Council members are trusting members of the public to follow social distancing practices and look out for others through proper hygiene and proactive safety practices.

Time will tell if the right decision was made this week, but the increased options for local residents is surely welcomed by those who feel limited to the confines of their homes.

Stephen Hemelt is the president of Port Arthur Newsmedia and can be reached at stephen.hemelt@panews.com or 409-721-2445.