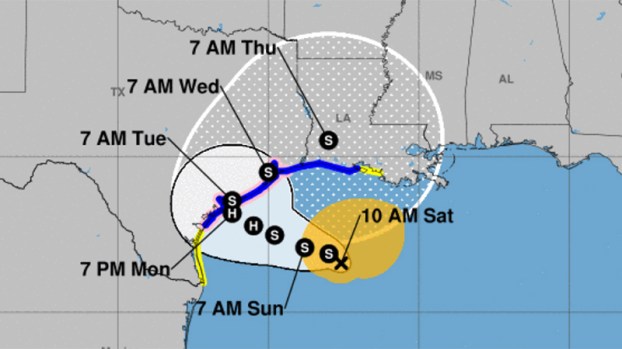 Beta has finally started its slow westward turn. It will be near the middle Texas coast on Monday, according to the National Weather Service.

A tropical storm warning is in effect for Jefferson County, as well as Cameron and Vermilion Parishes.

Warning Coordination Meteorologist Roger Erickson said occasional wind gusts of 30 to 40 mph could begin in these areas today and continue into next week.

Flooding from heavy rain is possible across most of the region.

Five to ten inches of rain with locally higher amounts is expected.

The timing of the heaviest rain is Sunday through Wednesday.

Storm surge of one to three feet above ground level is expected during high tides across the coast of Texas and Louisiana through the middle of next week.

Aircraft reconnaissance will be flying into the storm today and tonight.

The tropical storm force wind probabilities for Southeast Texas is 50 to 70 percent.

One to three feet above ground level is the current storm surge forecast. Coastal flooding is expected during high tides tonight through at least Wednesday.