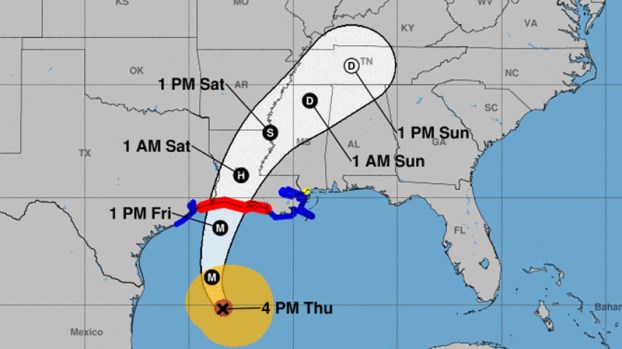 According to a 4 p.m. Thursday National Weather Service update, life threatening storm surge, dangerous hurricane force winds and heavy rain are expected along and east of the track of Delta as it moves inland across Louisiana.

In the hardest hit areas, expect widespread power outages, numerous fallen trees, and roof damage to some homes and businesses.

Roads will be impassable in many places due to fallen trees, debris, heavy rains and storm surge, Warning Coordination Meteorologist Roger Erickson said.

Hurricane Force winds extend 20 to 30 miles from the center of circulation. It will be 20 to 35 miles by landfall.

Vulnerable locations to storm surge locally include Sabine Pass and Bridge City, which could see surge three feet above ground.

City of Nederland officials said they encourage everyone to secure and prepare the exterior of their homes; this includes bringing in garbage can(s), securing patio furniture, outdoor play structures or amenities, etc. No mandatory or voluntary evacuation has been ordered for Nederland. City offices will maintain existing operations; however due to the wind forecast, people are encouraged to avoid any unnecessary travel.