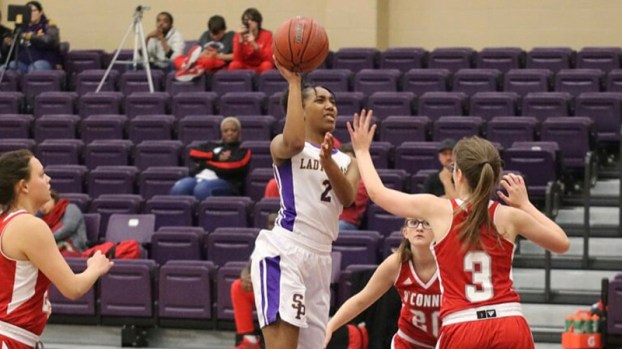 SABINE PASS — After making it to the second round of the 2A playoffs last season, the Sabine Pass girls basketball team returns several key starters with hopes of going further.

“We made it to the second round last year,” head coach Cody Almond said. “My goal is to make it at least three rounds deep this year.”

Sabine Pass lost to Shelbyville in the area round in February.

“We have our same core of girls from last year,” Almond said. “We have four of our starters. We have some freshman and some newcomers but we feel pretty good. We are feeling pretty confident. I still have my playmakers.”

One of those playmakers is reigning district MVP Charnel Jones.

Almond said the competitiveness in Jones’ family helps her excel.

“She comes from a big basketball family,” he said of Jones. “Her brother plays college basketball. Her sister that just graduated played for us and her other sister is on the team. They all play and that is her sport. She knows it. She sees it. She sleeps basketball everything.”

“They are both coming off of All-District selections,” Almond said. “Those three are great in every sport here. “

“She will be our starter for now,” he said. “Everyone else will fall in line. We have to put some games in to see where we end up.”

The head coach said he wants his team to have high character.

“If we win, I want to win the right way,” Almond said. “On the court, I want our speed and our defense to speak for itself. I think that is going to be our keys to make it a good season.”

Almond said he is happy the pandemic has not shuttered the season thus far.

“It was on the fence for a while there, but I am glad we are getting some games in,” he said.

Home games in BOLD; All games are scheduled for 6 p.m. unless listed otherwise.