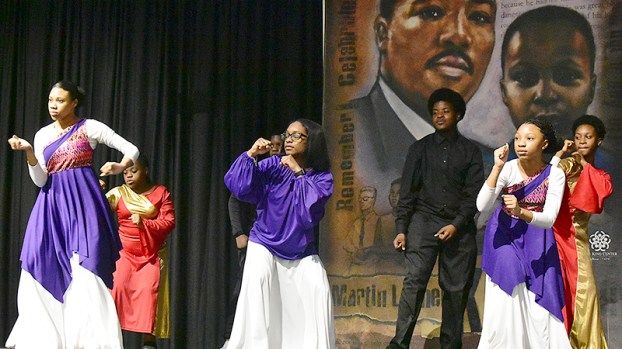 MLK Praise Dancers are shown performing in 2020 on the Bob Bowers Civic Center stage during a celebration in honor of Martin Luther King Jr. The event had to be held virtually this year due to COVID-19 concerns. (I.C. Murrell/The News)

The celebration, which is normally held at the Bob Bowers Civic Center, took place virtually to ensure the safety of the community in the midst of the pandemic.

As per tradition, the MLK Support Group named Albert “A.J,” Turner Man of the Year and Dora Nisby Woman of the Year.

“I never would have thought that my name would’ve been in the same sentence as Dr. Martin Luther King,” Nisby said during her acceptance speech. “I want to thank and honor the organization for continuing to do great work for Southeast Texas… I am only one, but I am one. I can’t do everything, but I can do something.”

Turner, who is running for a seat on the Beaumont city council, said he tries to model himself after King.

“I can’t do nothing but humbly thank God,” Turner said. “I thank God for the (MLK Support Group Founders) the Savoy family. It feels good when you know your work doesn’t go unnoticed. I will keep pushing hard and keep moving forward. I will do everything in my power that God strengthens me to better my community and stand firm on my morals, principles and values and continue to stand for the people.”

State Rep. Joe Deshotel, who also attended the virtual ceremony, said America needed to heed the words of King more than ever.

“This would’ve been a year that we would’ve been in Austin because the legislative session is every other year,” Deshotel said.” Unfortunately, because of events around the country, the state capitol is shut down because of armed insurrection, threats to people’s lives and property. If we ever thought that equality was reached or the goals and aspirations of Dr. King had been reached, we certainly see that is not the case.”

President of the MLK Support Group Hargie Faye Savoy said last year was a good year, despite the turmoil many faced.

“When we have the Lord on our side, regardless of what the circumstances may be, to know him, is to know that he is there in the midst of things that may happen,” she said. “He is the one and the reason for the many things we go through. Paul tells us that when you are weak, you are strong.”

Savoy also asked everyone to pray for essential workers, who are on the frontlines of the pandemic.

Taylor Getwood, who led several local protests in the wake of the killing of George Floyd by Minnesota police, introduced Beaumont NAACP chapter president Michael Cooper. After reading “Still I Rise” by Maya Angelou he had a question for those listening.