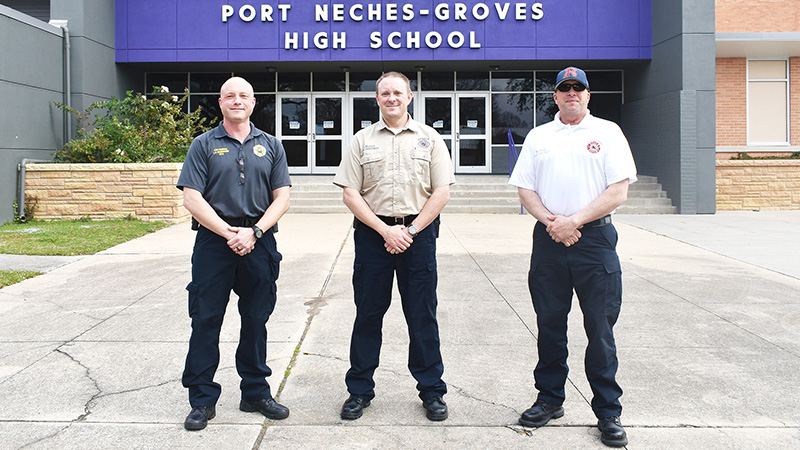 How they became firefighters

The three firefighters were attracted to the career differently.

“A lot of the fire service guys typically followed their parents, grandparents or somebody in the family,” Stegall said. “My dad was in and around the fire service for a time as a youth volunteer in Groves and managed the health safety and environmental and was fire chief at a local plant. And he also instructed at Texas A&M so every year we had to spend 12 weeks in the summer at College Station while he was at the annual fire school.”

Stegall’s parents also took photos and looking back he remembers going on his first fire call with his dad at the age of 6.

“I’ve always been kind of an adrenaline junkie and love helping others,” he said. “I was around it all the time. I really never thought of any other career.”

From 16 to 18, Stegall hung out with other firefighters at the Groves station, where he volunteered and trained, adding he knew what he wanted to do from a young age.

He graduated high school on his birthday and three days later started at the fire academy in Beaumont. After graduation he looked for job opportunities locally and found one in Port Neches. He was hired on April 26, 1990, and has been there ever since.

Washburn’s story is a bit different but it still leads to his career as a first responder.

“It’s not a glamorous story,” Washburn said. “Honestly I was working a job as a manager at Mazzio’s Pizza on (FM) 365 when I was about 20. My mom just happened to see the (job) posting in the Port Arthur News and told me about it. That’s really the first time I thought about being a fireman. I was the first one in the family. It’s not a family tradition. I ended up going and thought it was interesting.”

Port Arthur requires candidates to pass a Civil Service Exam, which he did, and was among eight firefighters hired that day in 1991. The rest is history.

“One of the things, once you get into it you realize, you know pretty quick if you’re in it or going to go somewhere else,” Washburn said.

Billeaud became interested in firefighters after watching them extinguish two blazes near his home as a child.

He joked he never had any athletic ability and thought he would need to be “strong and able to lift a house” in order to become a firefighter, so his interests moved on. He decided to go to college to become a trainer but things didn’t work out as planned so he worked some odd jobs then met up with two firefighters. He started volunteering in 1994 and reconnected with his original first love, firefighting. He was hired in October 1997 and hasn’t looked back.

The draw to the career

Firefighting, obviously, demands a certain kind of commitment that these three men have.

Washburn, when asked what it is about this career that has kept him there so long, was quick to answer.

“You realize it’s a light bulb moment,” Washburn said. “You can actually help somebody else. Your actions can have input into an outcome in someone else’s life, a direct personal thing. You see it; your hands are on it. There’s some kind of immediate gratification.”

Stegall said it is not a job for everyone, adding unfortunately there is a lot of tragedy that must be compartmentalized to handle the highs and lows of the job.

“One of the biggest things is you have to truly enjoy helping people,” he said. “I don’t know how to describe it other than to tell you when you take calls you see people at their worst and they look to you to fix their problem. Not all outcomes are good, but this is a profession that makes a difference.”

Billeaud’s thoughts turn to the community when asked about he and other firefighters being hailed as role models.

Firefighters, especially nowadays, are really looked up to especially when they go into schools during Fire Prevent Week or on calls to check fire alarms.

“When the kids see us in our uniform, their eyes light up and they admire us,” Billeaud said. “It really warms your heart.”

The three men recently got together for a photo outside their old stomping grounds at the high school and soon began sharing experiences as fire department officials and joking about their high school days.

Billeaud said he remembers seeing Stegall and Washburn on other fire calls, while Stegall said he knew Billeaud went into the field because the Mid-County fire departments often work together when needed.

It was about fie to six years ago he saw Washburn getting out of a fire truck and it dawned on him that another classmate was a firefighter.

The trio chatted a while as they stood at the place their class of 1989 senior photo was taken, the PNG Indian logo above them on the façade of one of the school’s wings.

Classmates, now in the fire service for decades and each with no mention of retirement, now look to the future.