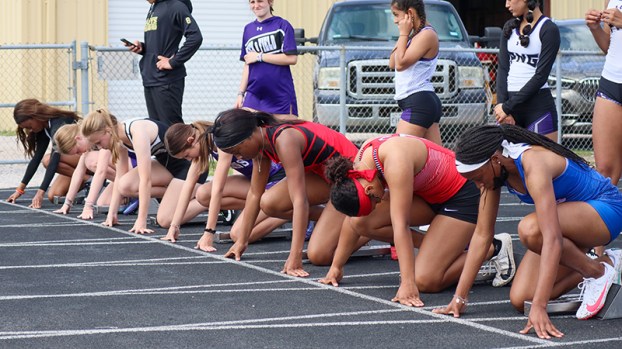 SPEED & STRENGTH: Port Arthur, Mid-County track coaches talk what & who is most important

As Memorial and both Mid County teams enter the heart of the track and field season, coaches said their teams are rounding into form.

All three teams will compete at the district meet this week at Barbers Hill High School in Mont Belvieu.

Nederland track coach Allie Crommett said it is difficult to gage where her team stands because the Bulldogs have competed against larger 5A and 6A schools.

“We’ve been around United and Port Arthur and Barbers Hill and we kind of know where we fall,” she said. “I am interested to see how PNG, Galena Park and Crosby get thrown into the mix and where it will put our kids.”

Crommett said even looking at times or measurements for other schools at other events can be tricky.

“We have an idea (of how students from other schools stack up), but it is all relative,” she said. “You don’t know if a kid is going to scratch three times or jump the gun or have a bad day.”

Crommett said Nederland has had a large turnout of freshmen runners on varsity this year.

“We knew coming in that they would be contributors but we didn’t know how early,” she said. “Coming from middle school to high school, we had to remind them that they are 14 and 15 competing against 18 year olds. They had to understand that it wasn’t really realistic right now. They have grown up a little bit and have stepped into some roles that freshmen don’t normally do.”

Nederland junior Ke’Asia Hall has a chance to qualify for the next round in five events, Crommett said.

At Port Neches-Groves, coach Peter Medlock said his team is excited to be competing against some of the best track teams in the state.

“This group of kids is probably one of the most impressive groups that I have been around since I have been here,” he said. “Their ability to deal with a rough situation is unbelievable.”

“If you didn’t lock in, you would get left out,” he said. “If we were invited to a meet anywhere in a 2-hour travel from us, we were locked in. You just had to take it, because you ran the risk of not being able to get in another meet.”

Medlock said his group has improved dramatically each week.

“They are not only improved, they are very enthusiast about it,” he said. “We have a tough district. You look at Port Arthur, United, Crosby, Nederland has always had a good program. Barbers Hill is always solid. It is not like we are getting excited to compete against some teams we know we can beat. We are ready to compete against some of the best track teams in the state. Port Arthur is one of the best teams in the state of Texas, period.”

Memorial coach Darrell Granger said this season is just beginning for the Titans.

“We are just starting the championship season,” he said. “We go from district to regionals to area to state and that is our goal all the time. That is just one step in our goal and that starts this week.”

Granger said he is looking forward to seeing Tre’Vonte Caines compete in throwing events and how his 4×100 and 4×200 teams compete this week. Jah’mar Sanders, Jaylon Guilbeau, Tyrence Augusta and Edward Brown will compete on both relay teams. Guilbeau will run in the 200m dash and Augusta will compete in the 100, Granger said.

He said he also expects senior Maleek Jones to do well in the jumping events.

The field events and qualifying runs will take place today with the final day of racing taking place Thursday.