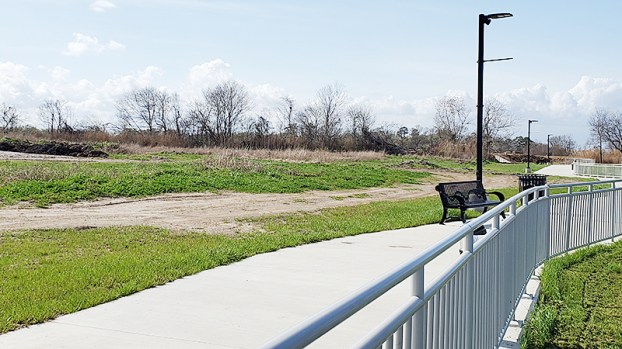 PORT NECHES — The last piece of commercial riverfront property in Port Neches is earmarked for a two-story restaurant/bar.

The Port Neches City Council approved a Letter of Intent this week with Obana Reality Holding and Rippeon Properties LTD, which gives the business owners 180 days to present a proposal to the city.

The people behind the vision are Min Dai, who is CEO and owner of several Toyko Japanese Steakhouse restaurants, and Jimmy Rippeon, of Classic Construction in Beaumont.

The new business will serve hors d’oeuvre’s and alcoholic beverages and is projected to cover the last remaining 3.3 acres of commercial land available on the riverfront.

The businessmen are also behind Beaumont’s Pour09 & Rooftop and Ko Korean Grill currently under construction on Dowlen Road.

Looking at the commercial riverfront property now, it may seem difficult to imagine the industrial waste sites located on the land several decades ago. The land was divided into two tracts and cleaned to residential standards, a more stringent standard than commercial.

Mayor Glenn Johnson was there for all of it.

During the years the land sat vacant as hurricanes and an economic downturn halted progress along the 80+ acres of property.

Then along came some people pitching an idea for Neches River Wheelhouse.

Johnson said the idea of a public-private partnership was foreign at the time.

Johnson said he and the council wanted this to be a win-win situation for both the business owners and the city.

“We had several public hearings and citizens presented us with some really good ideas, neither us or the Wheelhouse thought of,” Johnson said.

The fact that if the business were to shut its doors in the first five years of operation, the city would receive the property and business was a major idea in the agreement with the Wheelhouse.

“The Wheelhouse is a perfect example of an extremely successful story,” he said.

Johnson said a representative of Iguana Joe’s, a casual Tex-Mex eatery, visited the Wheelhouse and was impressed — so much so that a restaurant is planned for a location along the riverfront.

Then there’s Neches Point, a food court business with several eateries and a retail portion.

The whole development, including the new businesses coming in, is family-oriented, he said.

“I am absolutely ecstatic and the city council is too,” Johnson said.