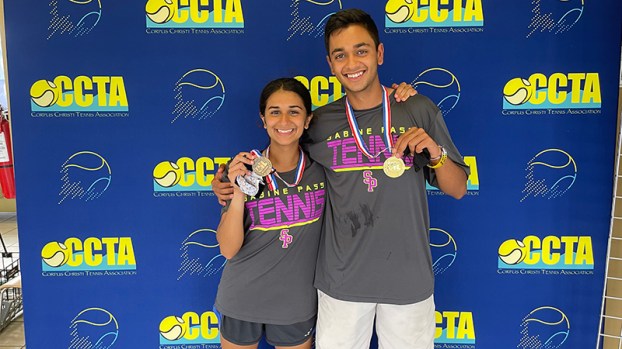 SABINE PASS — The Sabine Pass Tennis program is still in the midst of the most successful season the school has put together. After qualifying 10 students for regionals, the school will send senior Travis Mistry to state and his younger sister Hazel Mistry earned an alternate designation.

This will be the second time Travis Mistry goes to state.

“His freshman year, he swept through the region,” head coach Zachary Defrancis said. “He ended up getting third place in state. This year, he played six tournaments. In three of them, he won outright. In the others, he made it to the finals and lost close matches.”

Travis Mistry earned the top seed at regionals. In the finals, Travis matched up against a familiar foe from Dewyville. James Minard and Travis Mistry have played each other multiple times over the course of their careers.

Both siblings said competition is a family trait. Travis said their parents are competitive when it comes to family games, like Scrabble. Each sibling said they are the most competitive, but Defrancis gave the nod to Hazel.

“This is only her second year to play tennis,” Defrancis said. “Last year was cut short, of course. This year the five or six tournaments she played, she did better and better. At regionals, she shocked a lot of people. She didn’t get a seed, but she went in and won her first round match easily. She won her second match and beat the No. 4 seed. The third round, she lost to the girl that won the tournament… She really showed everyone there what she was made of and did a really good job.”

Travis said his sister works hard at her craft.

“She trained a lot,” he said. “I made sure of it. I made sure she was fully prepared. Hopefully next year, I won’t be able to see her take it, but hopefully she can take it all the way.”

Being the only means of transportation for his younger sister is one way Travis Mistry makes sure she practices. The senior said his day is pretty booked between school, tennis practice and homework.

Defrancis said he hopes the Mistry siblings success encourages others to join the program.

“Success breads success,” he said. “People like to be involved in things that do well. Getting Travis to state is a big deal. He is a senior and won’t be here next year, so having Hazel is great. She has some much potential and promise and people like to be around that.”

Travis Mistry said he is going to go to college and wants to keep playing tennis. While he has not yet decided where he will play college tennis, he has received an offer from a school in Ohio.