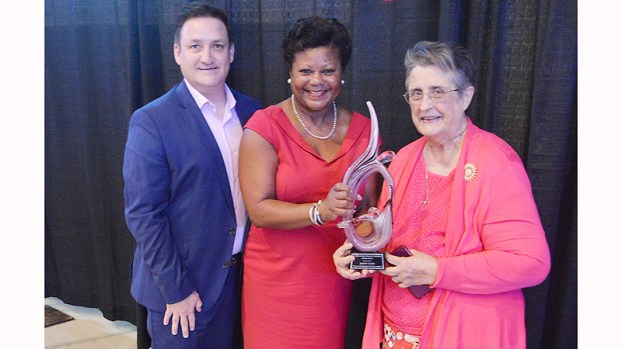 Even in a room full of hundreds of people applauding her service, Janet Cline defers to the accomplishments of Port Arthur students.

Retired from years of service with the Port Arthur Independent School District, Cline was the centerpoint during a surprise ceremony at the beginning of this week’s Pathways to Success Luncheon when she was awarded the Port Arthur Education Foundation Lifetime Achievement Award.

“I don’t know what to say except that was one of the most beautiful renderings of the National Anthem that I have ever heard,” Cline responded in quickly shifting focus to Memorial High senior Musiqa Tate, who in a recorded performance sang for the crowd gathered Thursday at the Carl A. Parker Multipurpose Center on the Lamar State College Port Arthur campus. “That was gorgeous. Thank you.”

Cline said she is “very proud” of what the education foundation has become, noting its humble beginning were “just a group of old ladies that tried to do something.”

Greater Port Arthur Chamber President/CEO Pat Avery noted Cline’s impact by asking her to look at what she has accomplished, noting years of support to local students and a legacy of coalition support that brought hundreds out to this week’s luncheon.

“We wanted to surprise you, and it looks like we were successful doing that,” Avery said.

Foundation Executive Director Joe Tant said it was his honor to introduce Cline for the award, noting she has worked and helped the Port Arthur area for generations while serving on the board of directors for the past 17 years.

“She is hard-working, tireless and has assured our students have the tools that will make them successful,” Tant said. “She is an original founding member of the Port Arthur Public School Foundation. She is a fantastic mentor and I absolutely love her.”

Cline closed her remarks by saying the foundation is a “wonderful organization that has helped numerous students. Thank you so much.”