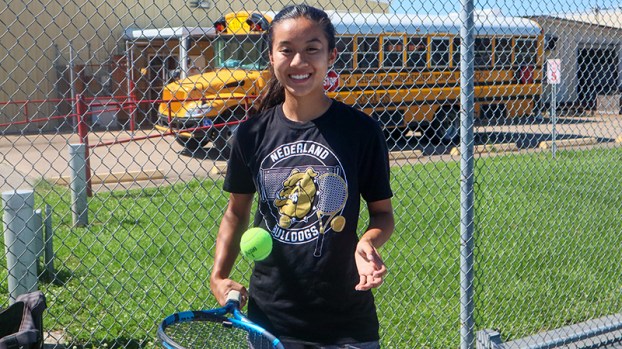 NEDERLAND — After upsetting the No. 1 seed at the 5A regional tennis tournament, Nederland’s Megan Do became the first Bulldog to win regionals twice in the tennis program’s history.

Do said going to state as a freshman just made her more hungry to find her way back.

“Going to state is always amazing,” Do said. “This year, I am playing singles. My freshman year, I was playing doubles. I feel like it is more of an accomplishment.”

While Do proved to be the best singles tennis player in the region, and possibly the state for 5A girls, she readily admits she is not the best tennis player in her family. Her older brother Brandon Do plays for Lamar University and won a state title two years ago.

“I probably first picked up a racket when I was about 4 and have been playing ever since,” she said. “My family is very competitive, but my brother is much better than me. I would like to say (I have beaten him), but probably not.”

Do said having a brother that is an accomplished tennis player keeps her sharp.

“I wouldn’t be here without him,” she said. “He helps me practice and motivates me a lot.” 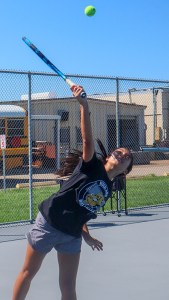 While having a brother who is known for being a superb tennis player has its perks, Do said it also comes with pressure.

“I have people always come up to me and ask if I am Brandon Do’s little sister,” she said.

Do splits her time between the tennis court and school work, adding junior year is hard.

During her upset at regionals, Do said she did not feel any pressure heading into the contest.

“Since I was the No. 2 and she was No. 1, I really didn’t feel a burden,” she said. “I was just out there trying to do my best. It ended up being better than I expected since I won… That match was a lot more mentally challenging. The other matches, I don’t really put a lot of effort into mentally, but that one, I really enjoyed it.”

Do said the win boosted her confidence level, and her coach Jorge Lopez said the win raised the level of expectation for Do.

“The days she has been practicing (since the regional tournament), she hasn’t brought her level down,” Lopez said. “She has been amazing. I think she realizes how good she can play and it gives her confidence. Hopefully, it will happen at the next tournament.”

Lopez said the junior has grown physically and mentally during her time at NHS.

“She came as a freshman,” he said. “She was thin framed, but she could still hit the ball really hard. I realized that she was a good player immediately, so I tried to work on the mental part of tennis with her. I made her read a book and we went over how she needed to behave in between points with the amount of seconds you have.”

While her confidence is at an all-time high, Do said she is trying to stay level-headed for state.

“Hopefully I can win a couple of rounds and get in the top three or something,” Do said. “I am not expecting too much because it is my junior year. I am saving that for next year.”

Do said she absolutely wants to play tennis at the college level.

“I haven’t decided where yet, but I am thinking about Lamar since it is so close to home,” she said.