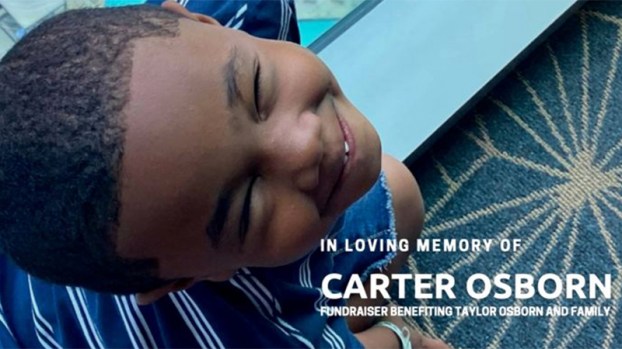 A gofundme page has been setup for a 6-year-old boy who, on Saturday, was fatally struck by an ATV at Tyrrell Park in Beaumont.

The child, Carter Osborn, was with family at the park when tragedy struck. Preliminary investigation by Beaumont police showed a 36-year-old man was operating the four-wheeler when he allegedly struck the child. The boy was brought to a local hospital, where he died a short time later. The driver of the ATV was arrested on outstanding warrants unrelated to the incident.

The fundraiser can be found on gofundme by searching “In Loving Memory of Carter Osborn.” As of Wednesday evening more than $19,000 had been raised, surpassing the goal of $10,000.

ATVs are not allowed in Tyrrell Park, where the tragic collision occurred nor are they allowed on the streets of Port Arthur. Four-wheelers can be fun when used properly in areas designated for them, but they can also be deadly — as in this case.

According to the Texas Department of Motor Vehicles, cities and counties may authorize the operation of ATVs and other off-highway vehicles on roads in the boundaries of the respective city or within unincorporated areas of certain counties.

These vehicles must display an Off-Highway Vehicle license plate when being driven in those areas. And they can only be driven on roads with a speed limit of 35 mph or less and are required to display a slow-moving emblem.

In Port Arthur the only ones who have exemption to ride ATVs on roadways are (1) a farmer or rancher traveling less than 25 miles; (2) a public utility worker; or (3) a law enforcement officer.

ATVs are to be ridden on private property only, not city streets, nor parks or other citizens’ properties without their permission, according to Port Arthur Police Office Rickey Antoine. Additionally, ATV riders must be at least 14 years old, unless accompanied by a parent or guardian or in direct supervision of someone authorized by a parent or guardian of the child rider. At this time there’s no registration for ATVs but you can get a title for them.

The case involving the death of Carter Osborn remains under investigation by Beaumont Police as his family prepares to lay their loved one to rest.

Please obey the law regarding these vehicles.

Mary Meaux is a news reporter at The Port Arthur News. She can be reached at mary.meaux@panews.com.