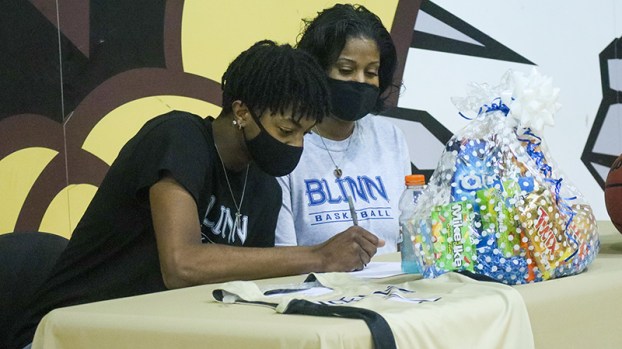 Nederland’s Tyler Jackson signs a letter of intent next to his mom, Anita Roman, on Wednesday morning. Jackson will play basketball at Blinn Junior College next season. Chris Moore/The News

NEDERLAND — Anita Roman watched with tears of joy in her eyes Wednesday as her son, Tyler Jackson, signed his letter of intent to play basketball at Blinn College.

“It is a proud moment,” Roman said. “He worked very hard, and I am super proud of him. Being a single parent, and he was one of three boys, it was rough. He’s matured a lot. He has grown a lot. He is staying focused. He was set on Blinn. His dreams came true.”

Jackson celebrated the occasion in the Dog Dome at Nederland High School. He is one of only two players to average more than 20 points a game in the past 15 years for the Bulldogs. The other to do so was Colton Weisbrod, who went on to play for Lamar University.

The big man led the Bulldogs in scoring and rebounding in 2020-21. Nederland finished the season with a 20-5 record and a playoff berth.

Nederland head coach Brian English said he used to worry Jackson would not reach his potential.

“It was before our playoff game when he was a sophomore,” English said. “He was sitting on the couch eating chips. I got furious at him. I was mad because he wasn’t focused. Then, he started figuring it out and grew into the player that he is today. He grew as far as his work ethic and his ability and willingness to be coached… I think he reached his potential here. Not a lot of kids do that.”

The Blinn College Buccaneers are members of the National Junior College Athletic Association. The school is located in Brenham.

“It feels great to sign,” Jackson said. “I wouldn’t be here without my mom, my family or any of my coaches. They all pushed me to be the player I am now.”

Jackson chose Blinn because of conversations he had with the coaches.

“I like the coaching staff,” he said. “I just liked the program ever since I was a kid. I used to watch Cam Newton. He went there. It feels good to be able to play over there.”

Jackson said he would be the first person on his dad’s side of the family to graduate from college.

“I definitely want to graduate,” he said. “I also want to earn a D1 scholarship.”

“I dunked on a guy pretty hard and sat on his neck,” he said. “The crowd went crazy. Everyone went crazy. It was just a good game.”