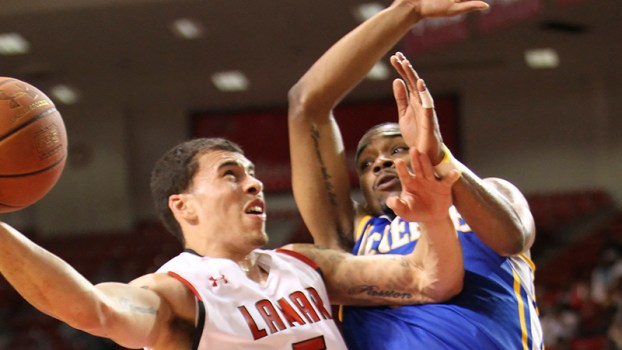 First day as a Brooklyn Net, former Lamar University guard Mike James stepped right into things, playing 21 minutes in a win over the Celtics back on April 23.

It was James’ first NBA action since the 2017-18 season, having played abroad for three years, including a stint with CKSA Moscow up through this spring. But he’s been a steady part of the rotation since his arrival, and he’ll be around for the duration with Thursday’s announcement by the team that he’s been signed for the rest of the season after running through two 10-day contracts.

“It’s a big ask to play on a different team in a different country, league, for a different coach, different rules, to come back here and adapt quickly into a team that has big aspirations and clearly has some superstars and a hierarchy already set,” said Nets head coach Steve Nash. “We love his talent, we love his potential, there’s been some inconsistency in his play, which is really natural, considering all those parameters I expressed. He’s still been really valuable to us, and he’s added a lot to our team. So we understand that it’s not an easy and straightforward situation to jump into and he’s done really well.”

Through 11 games with the Nets, James has averaged 7.1 points and 3.7 assists in 17.5 minutes per game, with a high of 15 against Portland on April 20. He drew his first start as a Net in Wednesday’s win over San Antonio and finished with 12 points and five assists.

James’ talent was evident early as he led the Cardinals in scoring during the team’s Southland Conference Championship run in 2012.

“I think that’s one of my jobs for sure, coming in and trying to push the pace and trying to get us into the offense quick and quick hitters,” said James after scoring 11 points with seven rebounds and six assists in Tuesday’s win over Chicago. “When we play with pace and we’re unselfish, obviously we’re a talented team, we’re a good shooting team, besides maybe me right now, but you know, I think we play with pace and move the ball pretty good.”

It’s a complementary role that differs from what James has been doing abroad the last few seasons, where he shouldered a primary scoring role. But with James Harden out for the last month, the Nets needed a true point guard to run the second unit and keep things flowing in minutes without Kyrie Irving on the floor. While Harden returned on Wednesday night, Irving was out, but soon the Nets will be back at full strength with Harden and Irving both ready to go with Kevin Durant.

“I think just cause my role’s a little bit different, that’s kind of hurt me scoring wise, but I don’t really know how to explain it,” said James. “I think just because we have so many different scorers, it’s made me a little tentative at times, which is probably horrible to be, but you know, it’s a work in progress. I think the more I play and the more comfortable I get out there I’ll play better. It’s not like I’m playing bad, I just can’t make a shot in general, but I made free throws today, so it’s better. But I think Steve just wants me to be aggressive. He just wants me to push the pace and play defense. And obviously Kyrie’s a point guard, James is a point guard. It’s not a lot of minutes for me to go around, so I shouldn’t save any energy when I’m out there, I should probably just give everything I’ve got and you know, hopefully if I play super well, maybe I’ll play more than 10 minutes, 15? Something like that. You know. That’s what happens when you’re on a championship team, especially like I did super late. So I’m just happy to be in the rotation right now and be able to play.”

As for those superstars and the hierarchy that Nash referred too, James knows he’s landed with a team built for big things.

“Just super talented,” said James. “I think I’ve been trying to figure out my role specifically just because I’m used to being a heavy scorer, and obviously with the people who are on this team, I’m never gonna be a heavy scorer. So just trying to figure out everything, but I think super talented. Really, we have a good ability to play defense when we really lock in, when we’re really all on one accord. And I think really when we all play together, the sky’s the limit.”