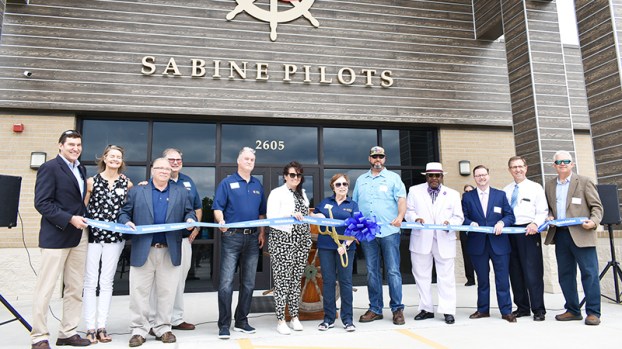 Members of the Sabine Pilots Association and dignitaries cut the ribbon outside the Pilots’ new location at 2605 Jimmy Johnson Blvd. in Port Arthur. (Mary Meaux/The News)

Looking out on a sea of faces, Sabine Pilots President Capt. Charles Tweedel noted it took 42 years for the organization to get back to Port Arthur.

Their previous office was on West Parkway in Groves in a space outgrown some time ago.Now, focusing on the future and working to meet the needs of growing maritime demands, Sabine Pilots now have a 9,716 square-feet building featuring a covered lobby/entrance, a 30-feet by 38-feet conference room, an executive conference room, a library/chart room, five offices, nine bunk rooms, an exercise/locker room and covered parking.

Adjacent to the building is a helipad for future use in transporting pilots and is also available to the U.S. Coast Guard and a nearby hospital, according to Henry de La Garza, public information officer for Sabine Pilots.

Tweedel explained the need for the new, larger office building stems from growth on the waterway and additional ship traffic. 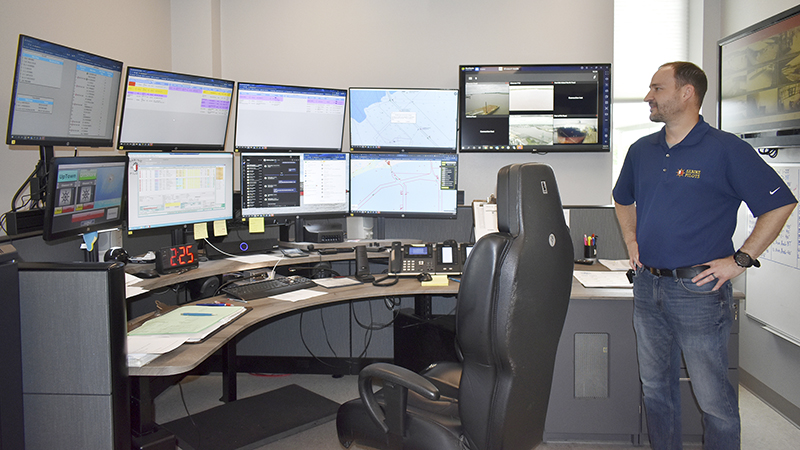 And with additional ship traffic comes the need for more Texas State Commissioned Pilots, which are specially trained ship captains who board vessels and steer them through the Sabine Neches Waterway. The Sabine Pilots have been around since 1881.

When Tweedel was hired in 1997 there were only 18 Pilots. Currently there are 31 Pilots with 15 more in training. They serve the shipping industry and public ports of Port Arthur, Beaumont, Orange and Sabine as well as the private oil terminals and the industrial complex of Southeast Texas.

Retired Pilots Dennis Neef, Millard Scott, Bobby Ratcliff and William Barran were on hand to enjoy the ceremony. The men began their careers as Pilots from the mid- to late-70s and 1980 collectively.

“It’s great,” Neef said of the new location and building.

He noted the ability for Pilots to hunker down in the building during a hurricane and orchestrate their duties a lot easier. 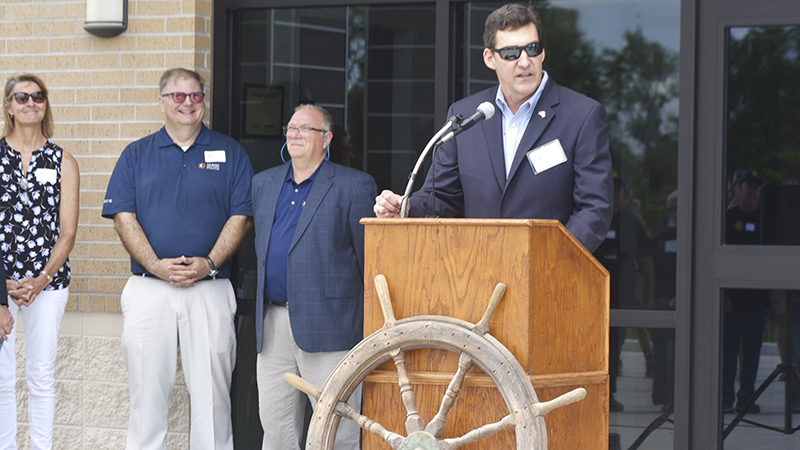 Carol McNeil Allen was there for the celebration as the daughter of a Pilot. Her father, Capt. Jerry McNeil, was on the water from 1975 to 2001.

“He likes to talk about the first cell phones,” Allen said, describing it as a “big bag he carried everywhere.”

Inside the new digs, Daniel Dubois was talking with visitors and answering phones. The chief dispatcher who will have been there 20 years in December, likens his job to that of an air traffic controller, but instead of planes in the sky, his job is more of ship traffic control. He deals with shipping agents and terminals along the waterway and more.

The Sabine Pilots do not take a day off. They operate 24/7, every day of the year. The only exception is if there is a mandatory evacuation for a hurricane, Dubois said.

They have the largest all-aluminum pilot boat built in the country. Breaux’s Bay Craft in Loreauville, Louisiana, is credited with creating 90-feet by 23-feet-by 12-feet-4-inch vessel called “Spindletop.”

There is also upcoming work at the Pilot station in Sabine Pass, Tweedel said.