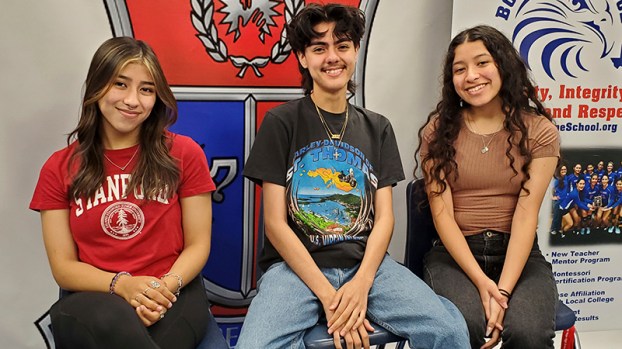 Jazmin Sanchez, left, Eric Barragan and Tammy Gallardo are set to graduate from Bob Hope High School next week. Barragan is valedictorian, Gallardo is salutatorian and Sanchez is ranked third in their class. (Mary Meaux/The News)

Top seniors at Bob Hope High School have their sights set high as they prepare to enter the next step in their educational journeys.

Valedictorian Eric Barragan, salutatorian Tammy Gallardo and third ranked Jazmin Sanchez have attended school together at the charter school since sixth grade. Upon graduation they will head separate ways.

Eric Barragan plans to attend the University of Texas, where he will pursue a blended major of psychology and computer science.

The two majors will work together with the field of artificial intelligence.

Barragan describes it as the study of how humans use technology and design-based on human nature.

After graduating, Barragan would like to own his own small business in Austin or New York City.

The valedictorian has had an interest in computers since he was 3 years old, he said.

Jessica Pulido, senior counselor, said Barragan has always been a student with dedication and drive.

“He knows what it takes to be successful and I have no doubt that his goals will be accomplished through his hard work,” Pulido said. “I know he will be very successful at UT Austin and throughout his career after college. He’s generous, kind, intelligent and focused.”

Originally she was thinking of going toward being an architect or engineer but decided she wanted more hands-on experience and be part of the whole process best suited for her.

In 10 years, she hopes to have her own bakery.

“That’s something I really want to do, to have my own business so I can help people in lower-income neighborhoods,” Gallardo said. “A part of my business model is to donate, you know, a lot of what I produce to homeless shelters or charities. So people get to experience something they usually can’t afford.”

Christian Cruz, career and technology education teacher, said Gallardo always works hard in everything she does.

“If I have to describe her in one word, it will be perseverance,” Cruz said. “She excels as a student and as an athlete. She is super creative. It has been a pleasure to be her teacher and coach for these four years of high school.”

Pulido also spoke of Gallardo’s dedication and of her understanding that to be successful you need to work hard.

“She’s done that throughout her high school years, whether it’s through sports or through dual credit,” Pulido said. “I can’t wait to see her continue to grow in college.”

Jazmin Sanchez plans to attend Stanford University, where she will major in sociology and minor in international relations.

She is interested in human rights and sociology is a part of that.

“I want to help human rights organizations around the world, not just the United States,” Sanchez said. “So I think if I do international relations, that can help a lot with that.”

This, she said, could even lead to working with the United Nations.

“I will always remember her edge-pushing perspectives and kind heart,” Sloane said. “I am so grateful to have had the opportunity to be her teacher. She is a true trailblazer with an amazing future.”

Counselor Pulido called Sanchez hard working and said she has no doubt Sanchez’s success will continue to her years at Stanford.

“I am very proud of her accomplishments,” Pulido said.

“I was amazed at their drive to fulfill their goals in life,” Marin said. “Even with two years of high school left, they were already looking into scholarships, university requirements and what they needed to accomplish by graduation. After one particular university tour, they all walked into my class and for about an hour asked what their next steps should be when it came to preparing for university. I believe they have the drive to accomplish any goal they set their minds to.”

Eric Barragan is the son of Sandra Barragan and Armando Barragan.

Tammy Gallardo is the daughter of Claudia Gallardo and Alex Vargas.

Jazmin Sanchez is the daughter of Deyanira Alcantar and Ramiro Sanchez and the sister of Bianca Sanchez.