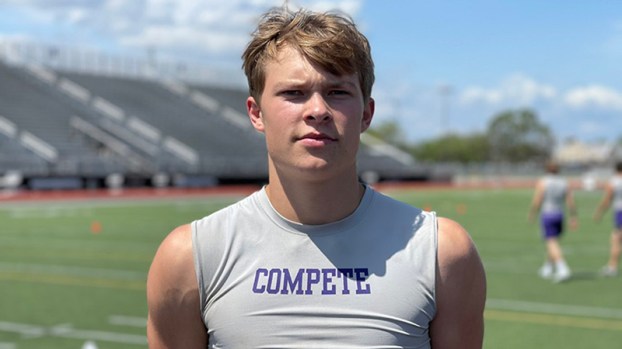 Cole Crippen will take over as the Port Neches-Groves quarterback in the fall. (Chris Moore/The News)

PORT NECHES — Playing quarterback for the Port Neches-Groves Indians naturally comes with lofty expectations. The two previous players to hold the position have left some large cleats to fill.

In the fall, junior Cole Crippen will add his name to the list of student athletes that lined up under center.

The quarterback said he does not feel too much pressure to live up to his predecessors, who put up big numbers during their time with the Indians.

“I feel pretty prepared,” Crippen said. “Coach Faircloth, Roschon (Johnson) and Blake (Bost) have prepared me. I went to UT the other day and talked to Roschon and I am always in communication with Blake. I just ask them how I can get better. I come here and do what they have been doing.”

The junior used to watch the PNG quarterbacks when he was younger and dream of playing the position.

Crippen said he has had to adjust to the pace of varsity.

“So far, I have done pretty good with keeping my pace,” he said. “I used to come out here with Coach Faircloth and throw with the bigger guys when I was younger.”

Bost said Crippen was getting varsity reps during his freshman year.

“I feel like he will not be intimidated or anything coming into the season, which is a big thing for a new quarterback. I think he will take over the offense and lead the team to a great season.”

Bost said he told Crippen to just play the next play.

“As a new quarterback, you are going to make mistakes, and you can’t let that affect the next play or next drive.”

Crippen said he follows the recent lineage of PNG dual-threat quarterbacks like Bost and current UT running back Roschon Johnson.

“I think I can just make plays,” he said. “I keep a simple mindset and just play smart. I think my biggest attribute is my scrambling and getting out of the pocket to make a play.”

Crippen said his favorite football memory was when he threw a touchdown in PNG’s varsity game against Santa Fe in the last game of the 2020 regular season. PNG won 41-7.