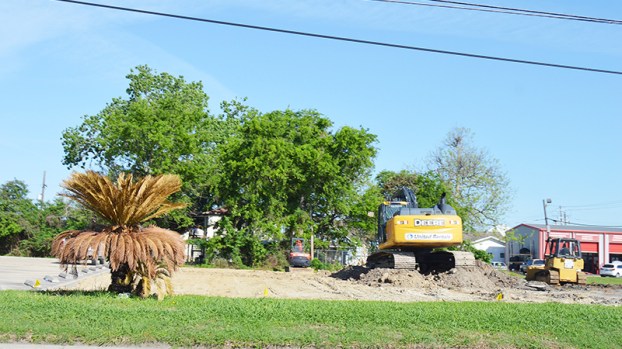 In April, a demolition crew is seen working at the site of the former Villa Motel on Nederland Avenue. (Stephen Hemelt/The News)

No one was checking into Villa Motel during its final months on Nederland Avenue, but hungry motorists might be checking out what comes next to the Nederland location near the intersection of Twin City Highway.

Checkers is in its due diligence period and design phase with plans to build a hamburger and drink drive-in at the location.

Everything is going smoothly so far, city leaders tell Port Arthur Newsmedia, which is great news for those who were tired of seeing the eyesore that the motel had become.

However, new construction is not imminent as Checkers developers have until 2022 to break ground, so there won’t be anything visible for a few months.

A local engineering firm is working with the City of Nederland in an effort to match the fast food drive-in’s needs with the current zoning requirements.

Both sides are addressing right-of-way issues in the rear of the property.

City officials say such processes are common and challenging when dealing with location redevelopment.

The challenge with redevelopment is meeting the current standard not met by the previous landowner.

However, those who spoke to Port Arthur Newsmedia this week said all sides are committed and confident in finding solutions to resolve these issues.

Any new construction will be a welcome sight for local residents and motorists who have long passed the motel structure, which had become home to vagrants and asbestos.

During an April city council meeting immediately after its destruction, multiple elected officials thanked the Nederland Economic Development Corporation for its efforts purchasing and eventually leveling the dilapidated structure.

The Nederland Economic Development Corporation purchased the building and land it sits on for $300,000 in 2020 from ZBC Realty Specialists Trust and received city council approval to spend an additional $31,858 with Salenga Construction for demolition.

Another $12,875 was approved for asbestos abatement via Inland Environmental.

Executive Director Kay DeCuir said the EDC was not looking to make a profit in selling the location but simply looking to recoup funds already spent while fostering economic growth in Nederland.

The location at 1132 Nederland Ave. is .32 of an acre, or 14,000 square feet, and is zoned commercial, meaning apartments or duplexes are not development options.

Port Arthur Newsmedia attempted to contact the EDC late this week to seek additional details on the sale price, but DeCuir was out of the office on planned vacation.

Councilman Emmett Hollier, who represents Ward 3 in Nederland, previously questioned the $340,000-plus in taxpayer-funded expenditures made by the EDC and approved by the Council.

“I’m only questioning it because I questioned it at the very get-go with the original price,” Hollier said in March. “We’re already going up and up and up. That is the thing I am concerned with: Our taxpayers’ money on any property that the city or EDC is purchasing. Are we going to be able to break even?”

DeCuir told council members at the time it would not be an issue, noting three buyers had already expressed interest in the location at that point.