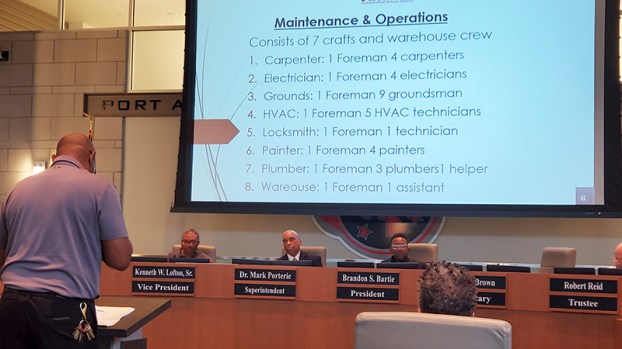 Monuments marking accomplishments from the three schools that consolidated to form Memorial High School will soon have a place of honor.

With the closing of the three schools came the storage of monuments marking sports accomplishments.

Earlier this week Radermon Scypion, in a maintenance/operations report, told school board trustees concrete would be poured in the grassy area in front of the PAISD administration building.

“We’re going to move all of the monuments from our old Lincoln, Thomas Jefferson and Austin campuses, and we’re gong to build a memorial site that will memorialize all of our high schools that closed down,” Scypion said, adding he hopes to have the project finished before the new school year begins.

Scypion’s report moved on to the topic of the grounds crew — the ones responsible for keeping the grass mowed at the 17 PAISD facilities, as well as being responsible for 10 sports and athletic fields.

The department head praised the crew, saying they are hard workers who get to work at 6 a.m. and leave at 5 p.m. and sometimes work weekends.

“The guys really put a lot of effort in trying to get these grounds done, but unfortunately, we had few guys we had employed who found jobs that are paying better,” he said. “They left us in June and that really set us back a bit.”

The loss of the three employees and the more-than-usual rainfall causing grass to grow faster is putting a pinch on the crew.

When there is a significant amount of rain, crewmembers are unable to cut the grass without leaving ruts and damaging the lawn. Rutting up the campus changes the dynamic of the grass, especially in areas where there’s high visibility, he said.

This means they must wait until the ground dries up before cutting.

Trustee Debra Ambroise, while thanking Scypion for his work, said she believes there are campuses that do not get the same amount of attention as others.

“I find that the areas that are more visible to the public, those grounds are pristinely maintained, whereas if I drive over to Lincoln or Booker T. (Washington) or Dequeen, not necessarily the same care has been given to those properties,” Ambroise said. “What gives me pause is that we’re having problems maintaining something like the grounds. Are we doing our diligence inside of buildings? There’s something that needs to be done.”

Ambroise said she understands the crew is shorthanded but feels the schools aren’t being maintained equally.

Scypion said he only has six employees cutting grass at the 17 campuses and he has spoke with superintendent Dr. Mark Porterie about getting some immediate relief.

He went on to say the same attention is given to all campuses and pointed to two governing factors: the weather and manpower.

The possibility of outsourcing the jobs is something the district may look at, according to Scypion.

“I can honestly say we need the help,” he said.

Trustee Joseph Guillory II agreed with Ambroise in that the lawn maintenance is not equal across the district.

“So my concern is, since we are the bread and butter of the community, is that presentation is everything,” Guillory said, alluding to the fact the district has a number of new facilities paid for with bond money.

Guillory also commended Scypion on the work done but added the facilities need to be maintained equally. He has seen mowing crews cut a field but not pick up litter, which leads to the paper and such blowing around. Then there are the tennis courts at Jefferson and Lincoln that are unusable and in need of attention.

Scypion and crews will continue to work with what they have to get the grass under control, he said.