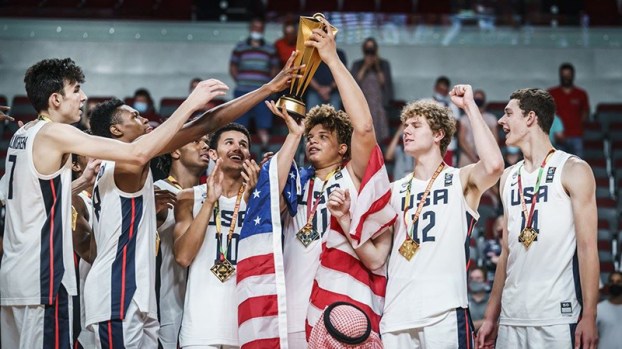 Kenneth Lofton Jr., center with flag around him, scored a team-high 16 points to go along with seven rebounds, two assists and one steal in Team USA’s 83-81 come-from-behind victory Sunday in Latvia.

For more than a decade, the United States has had a stranglehold on basketball. The 2008 Redeem Team brought back the gold to America, but the excitement around Team USA basketball has seemed to wane ever since. Fewer of the NBA’s elite returned after the 2012 games, leaving a team of talented players, but not many that fans can really get up for.

The exhibition games leading up to these Olympics have not given Americans much to cheer. The team started with losses to Nigeria and Australia. Then, a COVID-19 outbreak caused an already poorly constructed roster back to the drawing board.

The team seemed to be lacking in two key positions. Kevin Love, who has since left the team, was one of the team’s main big men. The team also lacks a true distributor.

While I do not have an answer for the questions about the team obtaining a pure passer (unless LeBron has dropped his Looney Toon squad), I do have a suggestion for the team’s big man issue.

USA’s U19 team just earned a gold medal in the FIBA games on the back of an impressive performance by Port Arthur’s own Kenneth Lofton Jr.

Lofton put up impressive stat lines during his team’s championship run and did so with a game that harkened back to the 90s. Lofton’s bully ball muscled past more slight “post players.” There are tall men and there are big men. Today’s basketball is more geared towards the former. Bigs have slowly moved away from the rim, sacrificing size for touch and handles.

Team USA added JaVale McGee, who does add some height to the roster, but lacks much in the way of offensive presence.

I am not necessarily saying that Lofton should get on the team and get starting minutes, but I think there is a value to having him as an option.

In Australia’s 91-83 win over the Americans, USA was outrebounded 32-25. Against Nigeria, USA was outboarded 46-34. Lofton’s interior presence could alleviate some of those problems.

The Memorial grad also led the team in scoring over the final two games with most of his work coming from the paint.

Not only does Lofton’s strength stand out, he has seemed to develop quite the post game with moves and counters to match.

I also believe that Team USA should be made up of up-and-coming players. I think having a team full of players 23 and younger is more compelling than having b-list NBA players. Yes, the team has Kevin Durant and Damian Lillard, but no one is interested in their Olympic story arc. A team of guys like Zion Williamson, Devin Booker, De’Aaron Fox and some college guys like Jared Butler, Luka Garza and Cade Cunningham would be way more compelling. Not to mention, it would likely help them develop more as it did with LeBron, Wade and Bosh in 2008.

I’m not sure if this run will force some changes or cause more players to want to represent Team USA, but help is needed and Port Arthur, Texas has a guy with one gold medal already.