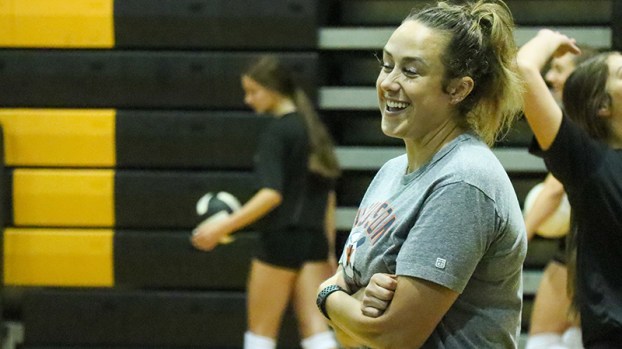 NEDERLAND — The Nederland Bulldogs volleyball team will have a different look when taking the court in a few weeks.

Along with the schedule release, Nederland head coach Allie Crommett revealed the gold alternate uniforms the team will wear this season.

Crommett said the uniforms are similar to the “Vegas gold” alternates utilized by the football and basketball teams. 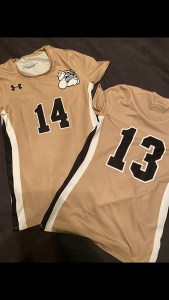 Nederland will sport a “Vegas gold” uniform as an alternate this season. (Courtesy photo)

“We are really excited to have a third uniform for varsity and a different look,” she said. “It was something I thought would be fun to have them for three-day tournaments. The girls didn’t know they were getting them, so they were excited.”

Last year’s season was pushed back as officials decided how to handle the season with COVID-19 restrictions. The UIL did not allow tournaments for indoor sports as part of the now-lifted restrictions.

“We are really excited to get back to normal,” Crommett said. “We are excited to go to some tournaments and not have to play the same people over and over. I feel like we really didn’t get a preseason last year.”

The tournaments allow coaches extra games to get extra looks at different rotations.

“I think for us, it gives us a chance to see where people really need to be,” Crommett said. “I am not super concerned with wins and losses (in non-district games). It matters, but I am more concerned with who fits where and who doesn’t early on before we start district.”

Crommett has been pleased with the summer participation.

The Bulldogs are returning 12 players from last year’s squad that made it to the second round of the playoffs before losing to Fulshear, who went on to play in the state title game.

Team Captain Katie Perez and Kamren Savarino are among the returners from last year’s squad, along with junior Ava Wiltz.

“I don’t know if we had really played that caliber of team,” Crommett said. “I think it was good for us. We, kind of, shy away from competition sometimes. In that aspect, I think it fired them up a little bit. They are pumped and they don’t want settle for just making the playoffs anymore.”

Nederland starts its season with a scrimmage Aug. 6 before playing Huffman Aug. 9. The Bulldogs’ first tournament will also be in Huffman Aug. 12-14. Nederland will host a tournament Sept. 9-11.

“We are going to some different places than we normally do,” Crommett said. “We have never been to Huffman before. We usually go to Pearland but with their restrictions, we weren’t guaranteed a spot. We are also going to Lufkin. I wanted to get a look at some East Texas schools.”

“I think because we have such a solid core group coming back, we have had an opportunity this summer for girls to play every position,” Crommett said. “For us, it is just figuring out what works best. We have a lot of options on where we can play people. That is going to help us a lot and hopefully gives other teams a lot of looks.”