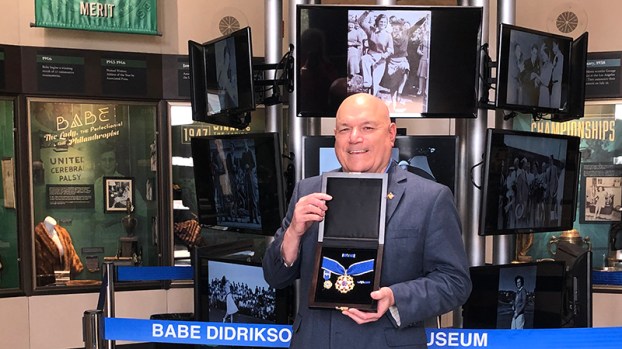 A couple of terrific touches have been added for the second annual Babe Zaharias Open, which teed off Tuesday morning at Beaumont Country Club.

For openers, the trophy presented to the winner on Friday will be forever known as the W.L. Pate Jr. trophy. Pate, of course, was the long-time president of the Babe Zaharias Foundation and a relentless promoter of the Babe as the world’s greatest female athlete, until he passed away last month.

In addition, sponsor exemptions into the tournament were awarded to the last two winners of the Babe Zaharias High School Girls Player of the Year Award. That means McKenna Henry of Hardin-Jefferson and Montana Dileo of LC-M were in the field when play began.

What an awesome experience for those two young ladies!

Total field for the BZ0 was 67 players, with 17 countries represented. The low 40 and ties after 54 holes play the final round Friday. There is no defending champion, as Lamar ex Julie Aime was unable to participate.

The BZ0 is the Women’s All-Pro Tour’s 11th and final event of its season. In addition to an $8,000 first place check out of a total purse of $40,000, the first and second place finishers advance to the Symetra Tour Four Winds Invitational. Also, the top five in season long point competition move on to stage 2 of LPGA Q school.

CHIP SHOTS: PNG ex Braden Bailey had a nice breakthrough last week not far from baseball’s Field of Dreams in Iowa. Bailey shot rounds of 68-67-71 for a 54-hole total of 205 that earned him a tie for fourth in the Cedar Rapids Open.

A birdie-birdie finish helped Bailey collect a check for $5,000.

It was another near miss week for Andrew Landry on the PGA Tour. Landry posted rounds of 72-70 to miss the cut by two stokes in Minnesota’s 3M Open won by Texas A&M ex Cameron Champ. With only two regular season events left in the 2020-21 season, Landry is a long, long shot to make the Fed Ex Cup playoffs.

After rallying from six shots back in last week’s Cozoo Open, he lost on the first playoff hole. The previous week in the British Open, Harding finished T19. He’s currently up to No. 114 in the Official World Golf Rankings.

Another LU ex who has made some waves his years is MJ Daffue. Daffue, who has an amazing record of getting into PGA Fields as a Monday qualify, made the cut the last two weeks. He finished T51 at the 3M and T62 in the Barbasol.

Despite having no PGA Tour status, Daffue has earned $167,000 while making four of eight cuts.

The PGA Tour is idle this week in deference to the Olympics golf tourney. In case you missed it, Patrick Reed was a last-minute USA replacement for Bryson DeChambeau. DeChambeau had to drop out over a positive COVID test.

John May of Beaumont became the latest golfer to score a hole in one at Babe Zaharias. May sank a 6-iron from 125 yards on No. 2 for what was his 6th ace. The shot was witnessed by Milton May.

The Monday Senior 50 Plus 2 ball at Zaharias saw the team of James Vercher, Tony Trevino, Glen Knight and Scott Bryant win the front with minus 3. That was also the winning score on the back for the foursome of Bob Byerly, Glen Judice, Charles Leard and Don MacNeil.

In the Super Saturday 2 ball at Zaharias, the team of James Shipley, Gene Jones, John Jessen and Tom Brown won the front with minus 6. On the back, the team of Doug LeBlanc, Brian Mirabella, Jay Hampson and Ron Hicks prevailed with minus 3.

Jessen rolled in eight birdies on the way to a 65.

Friday’s 2 ball resulted in another Vercher victory, with his team of Roger Koch, Richard Malone and Stewart Ellis taking the front with minus 2. The back was won in minus 1 by the team of Bobby Wactor, Eddie Delk, Dwayne Morvant and Randy Trahan.

The Wednesday Babe Zaharias DogFight was played in an all points count format. Winning with 44 points was the foursome of Kenny Robbins, Delk, Knight and Jimmy Schexnayder. Placing second with 40 points was the team of Jim Cady, John House, MacNeil and Everett Baker.

Golf news should be e-mailed to rdwest@usa.net