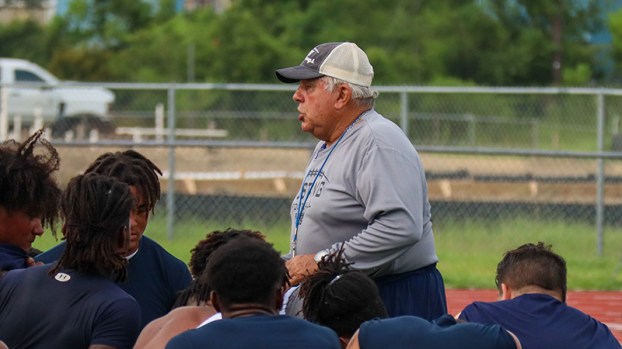 WEST ORANGE — West Orange-Stark is not a program that sneaks up on anyone. At 80 percent, the school has the highest win percentage in the state.

One of the biggest reasons for the Mustangs’ success is Head Coach Cornel Thompson, who is entering his 51st season as a coach.

He was named the assistant head coach and defensive coordinator for Dan Hooks.

Despite returning only four starters on each side of the ball this season, the Mustangs are favored to finish on top of District 11-4A Division II.

“We are short on some spots on defense,” Thompson said. “I am really worried about that. Our strength is going to be on the offensive line.”

Offensive Coordinator Ed Dyer said the program has always had high standards, and Thompson lives up to them.

“It is a battle every day,” he said. “You try to win every snap. A win for us is three yards or more every play. The expectations are extremely high here. The coaching staff knows that. It is interesting every day.”

During training camp this week, Thompson stuck with what he knows best – working with the linebackers, following them from drill to drill.

Before breaking into position drills, the team met on the field before starting the day. Thompson went over the expectations. The coach seemed to have the attention of every player as he spoke.

Before he broke the huddle, the coach that would moments later be screaming at his players, encouraging them to keep pushing, had a simple question for his players.

“Do we have any birthdays today?” Thompson asked his players. “Come on, now. I want to sing.”

Unfortunately, he did not get to belt out the birthday song that day.

Thompson said hopefully the season will give him more to celebrate.

The Mustangs begin their season with a scrimmage at home against Port Neches-Groves Aug. 13 and start their non-district schedule against Nederland Aug. 27 at Bulldog Stadium.